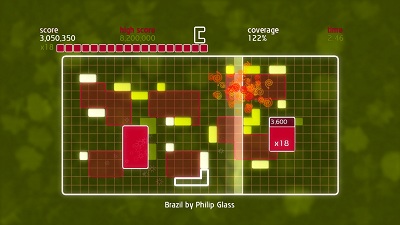 Chime 360 is a breif bright experience and similar to Lumines. I found it a wonderfully calming experience - a perfect respite from the busy modern life. But not only this because Chime benefits children's charities across the world courtesy of OneBigGame.

Initially I found Chime a little confusing to play which became slightly embarrassing when I realised just how simple the game's concept actually was. There's a grid on screen in which various shapes must be placed to create larger quads in order to eventually fill the board. At the same time a beat bar goes across the screen which co-ordinates the musical beat with the placement of the various quads making each track sound different on every play. Once over 50% of the board is filled, the next level is unlocked to play. Chime offers a timed mode and a free play mode which I found the most relaxing of the two.

It's an incredibly simple concept but at first it felt slightly intimidating with only basic instructions provided. The beat of the music inspired me to rush faster and faster through each level when often it wasn't really necessary for success. More precise movements were the key. Once I realised this it made for a much more relaxing and fulfilling experience. Frequently I found Chime quite calming and the perfect antidote to more thought provoking and reactionary games. It was the sort of game that I found myself playing after a long day of work and in dire need of something to relax my mind.

I could enjoy the experience without feeling pushed to compete within a set time frame.

The music used helped in achieving this aim with the soothing tones of Philip Glass, Moby, Markus Schulz, Orbital and Lemon Jelly. Despite their calming beats each track still maintained a level of enthusiasm that made me persevere with each level. As a non-competitive person I enjoyed the fact that I could just ignore the online leader boards and simply focus on enjoying the experience. The minimalist feel of Chime was refreshing to see although it was a shame to run out of levels quite quickly.

I really enjoyed my time with Chime. Unlike other games, it allowed me to turn my brain off in a similar manner to Flower. I could enjoy the experience without feeling pushed to compete within a set time frame. Throw in the ethical warmth of knowing that I've helped a charity, and this simple pleasure is a wonderful delight.

You can support Jen by buying Chime