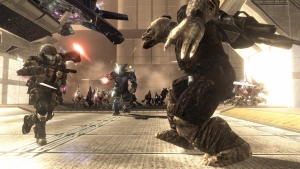 Although Halo ODST caused a hesitant reaction in me, I'd been unenthused by earlier instalments of Halo, I was pleasantly surprised how much I enjoyed ODST. Offering a much darker, more sombre affair, Halo ODST felt more intelligent in its approach to storytelling than previous instalments. It might be a very short journey more akin to a movie experience than true gaming challenge, but it left me with a satisfying sense of pride at my accomplishment.

In gaming circles it's a controversial thing to say but I've never been infatuated with the Halo series. I've enjoyed playing through Master Chief's adventures but I've never been very excited by them, simply trudging through the world saving heroics. Much of this was due to Master Chief's seemingly indestructible nature; it was difficult to relate to. Because of this Halo ODST intrigued me with its focus on more relatable everyday characters. When I realised it utilised a sci-fi film noir setting, it intrigued me even further.

From the offset events felt distinctly dark and sombre. Starting out alone in a strange city was quite unsettling and very in keeping with film noir. This became more apparent with the realisation that around every corner aliens were out to kill me.

With limited weaponry, I found myself slinking through the shadows trying to avoid being spotted. Although at times combat was essential, it made sense to avoid it wherever possible. On a number of occasions I underestimated the enemy's firepower and tried to clear a path, subsequently learning from my mistakes and resorting to survival tactics.

I genuinely felt relief at no longer being alone.

Eventually I came across a clue that transferred me to a flashback sequence involving my comrades. I genuinely felt relief at no longer being alone. I was on a heroic journey, attempting to make my way to safety along with my team of troopers.

With the game subsequently divided between flashbacks and the present, I was still sometimes separated from my comrades. This instantly put me on edge. Being alone again not only made me want to redouble my quest to discover what had happened, but also made me nervous of facing Covenant aliens.

While exploring the remains of Mombasa and trying to avoid horrifying monsters, I discovered various audio logs. These were disturbing at times demonstrating the human suffering during the War and adding a much needed extra dimension to the Halo world. One particularly harrowing transcript was of a young woman and her father trying to escape the covenant and their impending doom. Sending a chill down my spine, I felt much more in tune with the Universe in front of me - as if my plight was now even more urgent.

Despite the extreme apprehension I frequently felt, some of my most memorable experiences were extremely violent. At times my comrades and I had to clear entire areas of aliens. Ammunition was often limited meaning every shot counted and adrenaline levels were high. I found myself providing covering fire to aid my companion in our fight for survival.

The Engineer was a strange creature, a cross between an Octopus and a Turtle, but it instantly provoked my maternal instinct.

Nearing the end of the game, having been reunited with the female heroine Dare, I found the story take a brief back seat in favour of more action. It was a mad dash to escort an Engineer to safety and be reunited with my colleagues. The Engineer was a strange creature, a cross between an Octopus and a Turtle, but it instantly provoked my maternal instinct. I actually wanted to keep this creature safe, not just to get to the next stage but because I felt sorry for it.

Dare was an appropriately named character, due to her daring persona. Besides an instant feeling of feminist pride to finally see a strong female protagonist, I was just pleased to be teamed up with someone who knew what they were doing. I felt protected even though I was dealing with nothing more than well constructed Artifical Intelligence.

Halo ODST felt like I was embarking on a journey of survival. It may not have been the longest of journeys but it was certainly emotional.

Halo ODST felt like I was embarking on a journey of survival. It may not have been the longest of journeys but it was certainly emotional. Without the feeling of being invincible, as was the case when playing Master Chief, I felt extremely vulnerable. Once I had escaped with all my comrades, I felt a huge sense of pride engulfing me. I was pleased that every one of my team had survived the last stand and escaped the claustrophobic city of Mombasa.

At the very end, I spotted Dare and Buck finally hold hands. It was nice to see humanity shine through such horror, and appropriately the sky was brighter as the darkness of the story lifted a little. For me, it was hugely refreshing to see such an emotionally involving story be used in a game typically aimed at the more emotionless market of gamers. I felt alive and wished for more.

You can support Jen by buying Halo ODST