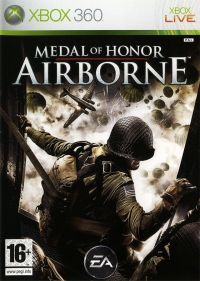 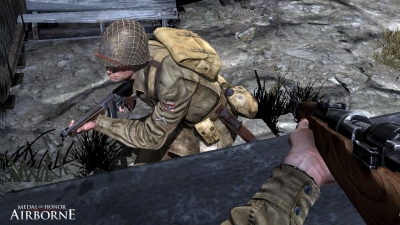 Medal of Honour: Airborne is joyous about parachuting and revels in sandbox play. While this is great fun, I'm a little uneasy at combining it with the real world death setting.

Remember that moment in Grosse Pointe Blank when John Cusack is trying to explain to Minnie Driver how he joined the army and became an assassin for the CIA? He explains that his 'psych profile fit a certain moral flexibility' and that killing people provoked no emotional reaction, except that after a while 'you get to enjoy it'. This speech frequently comes to mind when I play first person shooters.

It creeps up on me. I begin Medal of Honour: Airborne with the same look of wry cynicism on my face that's supposed to protect me from getting too dragged in. I shoot Nazis in the head and laugh at the ridiculous ease with which I despatch the first few. I sneer at the voice acting in the cut scenes. 'Is this historically accurate?' I wonder. This phase doesn't last long. Soon enough in a pitched street battle hiding behind some crates with only a handgun and a grenade, I'm left working out how on earth I'm supposed to remove the entrenched soldier behind the giant machine gun that keeps mowing down my fellow commandos.

Complete with moral flexibility takes about an hour to set in. High spot, sniper rifle, I'm now wondering what the respawn rate is as I squat in the bell tower overlooking the square. Bad guys rush out... crack! I'm merciless. Am I psychopath? I eventually stop because either I feel uncomfortable, I run out of bullets or just get bored. It's the getting bored bit that worries me.

I begin Medal of Honour: Airborne with the same look of wry cynicism on my face that's supposed to protect me from getting too dragged in.

Medal of Honour: Airborne certainly has the boredom factor at times. The checkpoints, even played on normal are hard to win that means you'll restart the game many times - which is a shame because one the game's most unique selling points is that you can start anywhere on the game map by virtue of parachuting in at the start of each mission.

To start with this is great fun, I felt a rush as the light in the plane went green and I ran into the wild blue yonder to free-fall over a war zone. Botch the landing and you're fumbling for your gun, get it right and you're ready to start kicking arse. It's an exciting and engaging way to begin a mission, you really do feel as if you can take everyone on and win.

It turns into a brightly coloured Nintendo skill contest.

Now, because it's such a long way to the next checkpoint the chances are you'll be Nazi food many times over. You soon realise however that the whole game map is basically full of places to drop on to including the rooftops of churches, towers, through open windows. Some of these 'skill drops' have bonuses attached. Suddenly instead of being a deadly serious game about World War 2 it's a brightly coloured Nintendo skill contest where, on completing a successful jump you rather hope your soldier will turn around and give you a thumbs-up.

And that's where Medal of Honour: Airborne is a different emotional experience. Yes, you do get engaged with conquering the mission objectives, giving the Nazi's what-for and going for death or glory, but only for a limited time. Its sandbox nature means you can complete objectives non-sequentially, provoking the sort of mischief you enjoy in Grand Theft Auto - : killing just for the fun of it, pissing about with grenades and trying to parachute into a tank.

Strangely though, this light relief doesn't ease my pangs of moral flexibility. If anything, the light hearted approach I'm taking to dispatching the enemy is a little more worrying. Because Medal of Honour: Airborne doesn't have the impact or fear of Modern Warfare or Gears of War, you simply don't care when your fellow soldiers get blown-up and even less so when you dispatch an enemy.

It's here that I'm more likely to act like a real killer - Grosse Pointe Blank style.

Some distance from the game and I realise I'm pretty uneasy with all this. It's here, rather than with the visceral bone shattering realities of Call or Duty, Gears of War or Uncharted 2 that I'm more likely to act like a real killer - Grosse Pointe Blank style.


You can support Jen by buying Medal of Honour Airborne