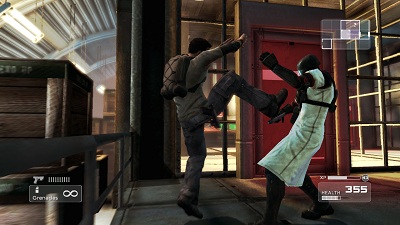 Shadow Complex on XBLA is a mix of glee and sorrowful violence. As we hear in the finale song, this is a real experience of light and dark day and night. Out of this contradictory affair though comes an experience that is surprisingly grown-up and a lot of fun to play.

I didn't expect to enjoy Shadow Complex so much. It looked like it'd just be a run of the mill 2D shooting game that I would quickly become bored of. It is quite standard shooting fare but it's also excellent fun. It has an aesthetic and musical score that projects somberness while also offering plenty of mindless violence. It's an uneven mix but it works well. If only it had been a little bit longer.

I went into it expecting a very gung-ho affair. After all, it's from the makers of Gears of War, one of the most blood thirsty games in recent years. I was immediately taken by surprise with the initial tone to Shadow Complex on the 360 being distinctly somber. I'm not one for usually noticing the feelings evoked by musical scores but this one felt foreboding as if something terrible was about to occur.

This made the game even more confusing at first. The first level didn't seem somber at all; it was exactly what I expected: complete carnage. Something that made absolutely no sense until much further in the story. I felt much more comfortable with the main crux of the story comprising of Jason and his girlfriend Claire on a backpacking holiday. It felt refreshingly familiar and conventional to me, at least until Claire is kidnapped by terrorists plotting to overthrow the country.

Although the storyline was certainly far fetched, I still found myself forgiving its madness. Much like a Bond movie, I suspended my disbelief so that I could enjoy the events that were unfolding without questioning the plausibility. It was the change in pace that caught me by surprise the most.

One particularly horrific sequence was a third of the way into the game. Having flooded a significant proportion of the underground tunnel system, I had to traverse my way past a number of bodies to get to the other side of the network.

I'd find myself spending 20-30 minutes at a time running through areas shooting anything that moved. It was liberating in its way and perfect stress relief. I could stop and take things slowly in order to collect all the upgrades that were hidden around the map, but I could also just turn my brain off and hold down the trigger button. Then I'd come across more depressing moments of the game which would take me by surprise and nearly make me question my character's motives. Jason, the lead character, felt too comfortable to don various pieces of high-tech armour and to shoot anything in his wake. A strange move for someone who seemed quite normal at the start of the game.

One particularly horrific sequence was a third of the way into the game. Having flooded a significant proportion of the underground tunnel system, I had to traverse my way past a number of bodies to get to the other side of the network. The 2D graphics may have belied the true horror of the event as at least I wasn't subjected to the faces of the dead, but it still felt disturbing. This was emphasised further by a slow, somber piano piece playing at the same time. It was very distinctive but it felt a little strange next to other, more frivolous acts of violence. My fear of drowning certainly made it worse.

The 2D graphics may have belied the true horror of the event as at least I wasn't subjected to the faces of the dead, but it still felt disturbing.

It only took me a matter of a few hours to reach the conclusion of Shadow Complex. I was still none the wiser as to the depth of the plot but that didn't matter in terms of enjoyment.

Shadow Complex used a strange mix of dramatic devices. I spent equal time simply killing everything in my wake, as well as being captivated by the somber tone of the game. It was an odd but not unwelcome combination. At the end of the game, while being excited that I had successfully destroyed the enemy's base, I felt sadness provoked by the game's finale song: Light of the Day/Dark of the Night. Although none of the lyrics felt memorable, the music itself made me feel sad even though I should have felt euphoria at my victory. It suggested that there was more violence and hardship to come for my character.

Shadow Complex was immensely enjoyable but looking back, it was also sorrowful and morose at times. Well worth playing but a game that has more depth to it than one would initially assume from the genre.

You can support Jen by buying Shadow Complex