Other GamePeople columnists have reviewed this from their perspective - huh?:
Frugal Gamer (360)
Tech Gamer (360) 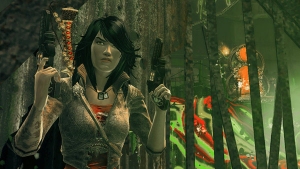 A tightly clad female character, swords, guns and random goons. WET is a Quentin Tarantino film in game form. It is true popcorn gaming for the masses, a forgettable but palatable experience although you might have to leave any dislike for misogyny or gore at the door. I tried it mostly because I wanted something mindless but entertaining for a couple of days. WET mostly matched perfectly with my wishes, within seconds of finishing the game I had forgotten about it, much like a Summer Blockbuster.

This becomes quickly apparent when, upon loading the game, I learnt how to jump and shoot at the same time: something that I can't see as being overly realistic but very appropriate for an excitable action film. WET is all about killing the nameless goons that confront you, the more 'stylishly' the better. Bonus points are rewarded for stringing together a range of different acrobatic moves and killing a number of goons at a time.

When playing games, I like to know why I'm killing people but WET dissuaded me from caring by detaching me from the action. Sure, it might be incredibly violent with blood and gore scattered all across the surroundings supported by a flimsy storyline, but it persuaded me that there was no need to think any more deeply about it. I was being encouraged to treat the nameless foes as if they were merely mannequins for me to unleash my pent up stress upon. It certainly did the trick at first.

Leaping deftly from pole to pole shooting at anything and everything that moved was a refreshing interlude between two busy and emotional weeks.

It was satisfying to leave complex, convoluted and precious storylines behind for a while. WET simply didn't need to engage me like this, instead it cheered me on to enjoy the violent carnage. Leaping deftly from pole to pole shooting at anything and everything that moved was a refreshing interlude between two busy and emotional weeks. Switching off was just what I needed and WET certainly encouraged it.

As time went on however, WET tried to be a little more complicated. It threw in some platform elements and an on rails driving based shooter section. This was where I started to get annoyed. WET had enticed me into believing this game understood me, that it knew all I wanted to do was to de-stress and relax. Instead it started trying to be something more than a simple, mindless action game. I ended up less a sensitive gamer, and rather more an irritated gamer.

WET began to feel more like a relic from the 80s or 90s with its unforgiving approach to platforming. I spent many, many times trying to traverse certain areas with little success. One particular scenario required me to hop across a live minefield. A simple excursion for an experienced player such as myself, surely I would have no problems here. Unfortunately, the Rubi didn't seem to react accordingly. Even when using the same button combination, it felt like she had a mind of her own. I'm normally quite mild mannered so any game that frustrates me so much as to swear, is guaranteed to be quite a frustrating title. It just wasn't fun anymore and I could feel the previous week's stress quickly returning.

Her gender really served no purpose other than for aesthetics' sake.

With the realisation that this game was rather flawed, frustrating, and my anger increasing, I could no longer ignore its reprehensible aspects. It was as if these moments of annoyance had broken my rose tinted glasses and I'd realised just how insulting this game really was.

Rubi, the heroine, is not as misogynistic as some female video game characters, but without personality or will of her own it was clear that she was mostly there to satisfy a younger male gamer's lust. Her gender really served no purpose other than for aesthetics' sake. Much like the rest of the game, it was a missed opportunity. The language used in the game was littered with uses of the worst swear words possible meaning that at times, I did have to be careful when I was playing it. It caused some raised eyebrows amongst the nearby adults.

It clearly set out to shock.

WET resulted in a somewhat disappointing Summer Blockbuster for me. Although that's not to say it wasn't fun for a day or two. It clearly set out to shock but in the end turned out to be just a little too bland to truly hit its target. There is only so much random killing that can be done before I start to wonder just what the point is. By the end of the game, I didn't really care what had happened; it had served its purpose. The weekend was at an end and I'd had a vaguely enjoyable time playing it.

You can support Jen by buying WET