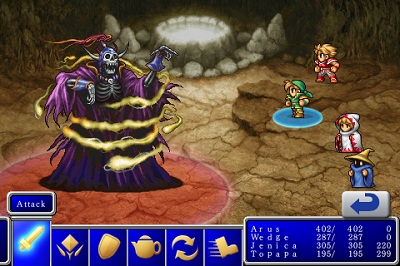 Final Fantasy is a nostalgic piece of gaming history. However, beyond the sentimentality of revisiting the past the grinding nature of the game exposes how far the series has come in the intervening years.

I couldn't help but smile as the memories of playing it years ago came flooding back but that was the only emotion it really stirred. While the game mechanics are as strong as ever, the narrative structure is non-existent and there's no sense of emotional connection to be seen. Final Fantasy serves well as an iPhone game offering plenty of fun reasons to keep playing, but no compelling emotional factor within.

The game begins with a brief introduction to set the scene. Four so-called prophesied Warriors of Light must save the world from certain destruction. It's a simplistic tale and one that I've seen many times since. It's quite clear that such tales form the basis of the rest of the Final Fantasy series. Unlike later titles however, there's no real plot or character development further than this. The four playable characters are created at the start of the game. You can name each of them but otherwise you are restricted to a choice of five different classes who initially all seem rather similar to each other. None of the main characters have any real identity behind the basic cardboard cutout-esque front.

As I played along I tried to create an identity for each player myself. My main character was still a stereotypical maverick warrior but he would charm the ladies as he went from town to town, akin to a George Clooney of the RPG world. However if it wasn't for my fertile imagination I would have been bored quickly by the storyline. The dialogue and storytelling throughout the game stuck to the basics without any real variation. The dialogue felt stilted and functional with no charm to it. There were all the typical cliches such as a Princess being kidnapped early on and needing rescuing. None of the various events in the story ever really perked my interest however. It was all too bland and predictable. To be fair to it, this is no doubt because so many games after it went on to copy the structure of Final Fantasy but it really hasn't aged well.

I felt immense waves of nostalgia every time I heard the famous battle music that has been used in so many Final Fantasy games since.

There were many hours of gaming in this pint sized package and it certainly kept me entertained on my commute but this was solely down to the mechanics behind the game. I enjoyed the grind of experience gaining and it was immensely satisfying when I acquired ships and canoes to travel in. I also felt immense waves of nostalgia every time I heard the famous battle music that has been used in so many Final Fantasy games since. However I felt nothing towards the characters or their plight which greatly dented my enjoyment of the title.

Final Fantasy suits the portable nature of the iPhone well. It offers a more meaty distraction than many other offerings on the App Store, but it's a shame that it fails to offer a key feature of RPGs: a strong storyline. Too often it felt more like busy work rather than an engaging story.

All that ever seemed to happen next was more foes to kill and an all too flimsy reason behind my motives. I eventually completed it and saved the world by killing the relevant Fiends but I felt no urge to go back. It had served its purpose but I felt cold towards it and had realised that you can't go back to 20 year old RPGS. They just feel too dated and more like a history lesson than anything else. I still loved that battle music though.

You can support Jen by buying Final Fantasy