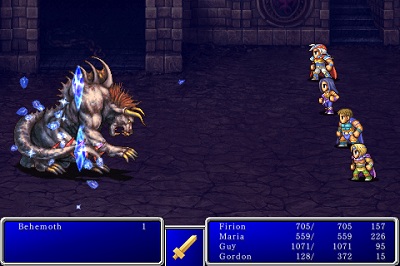 Final Fantasy 2 is more evokative of later games in the series, and demonstrates the various elements that make Final Fantasy such fun. It might not be as polished as later Final Fantasys but it makes for a much more well rounded title. Finally, there's some semblance of an emotive storyline making it an enjoyable bitesized piece of considered gaming, even if it is still a little shallow.

This time round there's a greater emphasis on character development with the plot focusing on three youths who have been left for dead after an army invasion of their home. In their efforts to try to find their lost friend, Leon, they become wrapped up in a rebellion which eventually leads to their saving of the world.

As time went on I found myself enthralled by the characters. At various points the core group went through great hardship. At the beginning they find themselves completely alone with their life thrown up in the air through no fault of their own, something that I could relate to. Throughout the rest of the story, they found themselves up against seemingly impossible odds with them frequently being just too late in their many attempts to stop their foe.

Perhaps the most shocking moment was the latter discovery that their old friend Leon has turned against them and become an evil knight. Although the dialogue is at times laughable and poor, I still couldn't help but feel horror and betrayal when I discovered that Leon has turned so evil.

I still couldn't help but feel horror and betrayal when I discovered that Leon has turned so evil.

I felt the reverse fortunately when Leon eventually realises the errors of his way and helped me in my quest to defeat the evil Emperor. The feeling of redemption was strong. Putting it into historical context it's clearly quite a convoluted story for the time and clearly one that went onto be a great benchmark for future RPGs. It's also a tale that transfers well to the portable format of the iPhone. The story kept me suitably entertained on public transport even with the bustle of life going on around me.

Comparing it to modern RPGs such as the more recent Final Fantasys or the emotional tour de force of Lost Odyssey, would clearly be wrong but it's impressive that Final Fantasy 2 still stands up well. The dialogue offers moments of surprising poignancy although for the most part it is rather dated and limited. Looking past that, it's an enjoyable and somewhat emotive experience.

There are also the lovely moments of nostalgia. The music is as always wonderfully familiar. Even better the ever adorable chocobo finally appears for the first time here. They might not be as visually cute with their 8 bit appearance but the charm is still there and it's fantastic to see their origin.

Origin is the key word to Final Fantasy II. It shows the evolution of the series perfectly. It's a much less polished product than its successors but it also shows just what has changed from the original Final Fantasy. The story is that bit more involving and while the dialogue still has a way to go, it's clear that the series is going in the right direction. Most importantly it's an enjoyable experience even if it is still a little shallow.

You can support Jen by buying Final Fantasy II