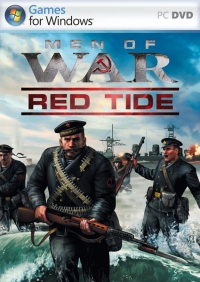 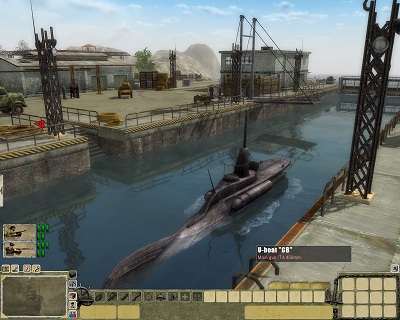 Men of War: Red Tide is a curious game that offers glimmers of emotional connection despite ultimately feeling rather limiting and overly complex.

The detached nature of the RTS genre doesn't lend itself to an emotive response and this is frequently demonstrated here. Fortunately the context of the game which focuses on the Russian side of the Second World War, offers reasonable thrills which kept my interest piqued.

Immediately thrust into action, Men of War: Red Tide took some adjustment. There's no sign of a tutorial to ease players in. Instead you start out as a small, plucky band of Russian soldiers disembarking from naval ships in order to wipe out the German enemy. It's an interesting perspective to take as I've previously been more accustomed to either controlling British or American forces. In this game you play the 'Black Coats', an elite group of Russian soldiers, who undertake missions near the shorelines of German and Romanian strongholds.

I found things quite confusing at first in terms of adjusting to the many controls on offer but this added to the heightened sense of emotion that I felt while landing at shore. This unfortunately quickly turned to frustration as it wasn't long until my forces were wiped out by enemy troops in entrenched positions.

After a few attempts, I adjusted my tactics and appreciated just what a complex title it is. Frequently I found that I had to adapt my stance quickly in order to have any chance of survival. There's a lot of micro management required here and a constant need to keep on top of things rather than allow my troops to make their own choices.

While I felt quite overwhelmed and a little disappointed at the harsh difficulty level, the emotional side of me revelled in the harsh exterior that was on offer here. Although I have no real life experience of battle, I felt that Red Tide clearly demonstrated the hurried nature of intense conflict and the relative ease of making a rash decision in the heat of the moment. Some of the battles I went on to experience took upwards of an hour or more to complete. The longer battles went on, the more mentally tired I felt and I did begin to wonder whether I was making simple mistakes through my lethargy.

The emotional side of me revelled in the harsh exterior that was on offer here.

Against my preconceptions, I was surprised to find that initially I was saddened to see the slightly chilling vision of my miniature sized troops be swiftly wiped out by the likes of tanks and machine guns. I didn't expect to feel affected in any way considering there was no real back story to each member of infantry but I still a little guilty as I sent troops to their inevitable doom. Watching their health bar swiftly deplete all because I'd made the mistake of not offering sufficient cover.

It made me think about the suffering that the real faceless troops on both sides of the conflict must have gone through during that time. How fruitless a fight it must have felt and the feeling that there's no hope. Although not as strongly obvious as seeing the actual faces and learning more of their plight, as in Call of Duty or Saving Private Ryan, it was still moving.

As I progressed further my interest and consideration waned though. This was a battle of survival for me as a player, my connection with each pixel less and less great. The competitive part of me just wanted to get through the outrageously difficult scenarios and get to the end. Men of War: Red Tide tried to keep me interested emotionally by offering a scattering of photos on each loading screen, presumably showing me real soldiers at war, but I felt too overwhelmed by the game play on offer to take it in.

I still a little guilty as I sent troops to their inevitable doom.

Solely as a strategy game Men of War: Red Tide offers a lot for those looking for a challenging title. There's a tremendous wealth of depth with the ability to control a vast array of different things such as tanks and artillery positions.

However, this is to the detriment of the game's emotional punch. The need for constant micro management of each elements meant that my interest for the story soon wore off. That this was like the constant battle for survival in a real war wasn't lost on me, but taking away the narrative behind it, I found myself disconnected and disappointed.

You can support Jen by buying Men of War: Red Tide