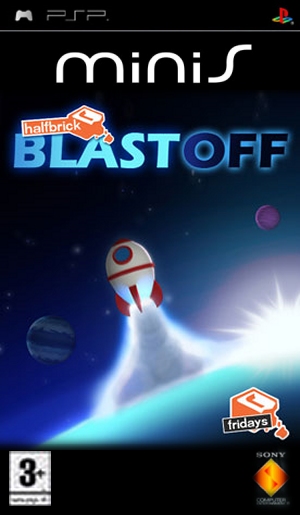 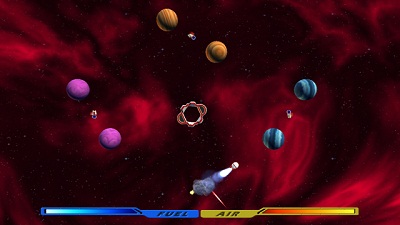 Much like Echoes, Blast Off is another great example of a game that you can dip in and out of. Fitting it's PSP Mini format well, it might not be the lengthiest of games nor the most complicated of games but it is certainly enjoyable. Blast Off on the PlayStation Portable is that strange combination between compulsion and frustration that at times came close to being thrown out of the window.

Blast Off reminded me of games that I used to play on the Commodore 64. Frustrating but compelling little experiences that used to infuriate me as a child but that I still kept returning to time after time for some perverse reason.

Blast Off PSP was simple enough to get the hang of, but not exactly easy - if often required some very precise movements. You fly a small rocket ship through space, which must pick up floating astronauts in order to open a gate and progress to the next level. The catch being that if you propel yourself too hard, you can get stuck in the gravitational pull of a planet or black hole making things a lot more infuriating at times. It's far from a deep experience offering no plotline or any semblance of moral dilemma, but it is good fun providing you have buckets of patience.

I kept going and gradually found my manoeuvring ability improving. At least until I got cocky again.

I don't normally have much patience but I found myself persevering despite this as there was something quaintly charming about Blast Off. The more I played, the more I improved and although at times I wanted to throw my PSP out of the window in frustration, I didn't. I kept going and gradually found my manoeuvring ability improving. At least until I got cocky again, thought I was God and overdid boosting my space ship, immediately smashing into a nearby planet.

Blast Off on the PSP is an enjoyable little doodle even if it isn't for everyone. It's a game that focuses heavily on reaction based gaming and frequently requires pinpoint precision. I have to admit it's not something that I would normally play, usually preferring story driven games but there is a lot to love here and it makes an excellent game to drop in and out of in ten minute bursts.

You can support Jen by buying Minis: Blast Off