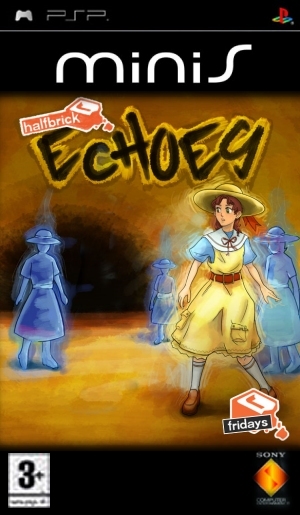 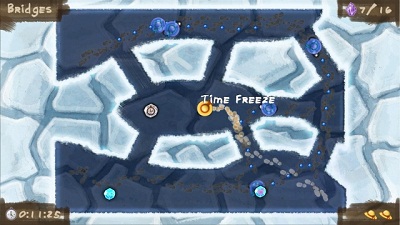 Echoes is a good examples of frivolous gaming. It's one of the new PSP Mini range that are soon playable on the PS3 as well. As such, it doesn't offer anything more than a distraction compared to meatier games. What it does offer though is challenging fun for five minutes, even if it's not exactly thought provoking. More suited to PlayStation Portable then than big brother PS3

Echoes is a very simple concept that is deceptively difficult yet addictive. There is a semblance of a story involving a girl transported to a dream world, but it's all rather tenuous and something that I doubt anyone pays attention to. The game was easy to get to grips with. I had to collect gems littered around a maze. It sounded simple enough until the game pointed out that every time I collect a gem, an 'echo' appears and follows the path that I took to get to the gem. Touch the echo and you die. Again, it was still quite simple at first, but as the levels became increasingly more complex, so did finding a path that was free of echoes. The music was encouraging me to move faster and faster through each maze, making the action feel very frantic.

However as a testament to quality game design, I was never put off by the game's steep difficulty level. I especially enjoyed the fact that many of the mazes were of interesting objects such as an hourglass and even a map of Australia.

The music was encouraging me to move faster and faster through each maze, making the action feel very frantic.

As time went on I realised that PSP Echoes wasn't just about reacting quickly and dodging the echoes, there was a real strategical element here. Planning ahead and working out the best way of getting to all the gems without getting trapped into a corner by the echoes became much more important than just throwing myself into the game and hoping. It made me re-evaluate my velocity based reactions to games such as these, and realise that speed isn't necessarily as important as careful preparation.

Echoes was most appealing because it taught me a valuable lesson. Initially I judged it as a reaction based game, but it actually requires a certain amount of tactical planning in order to succeed. It might not be a particularly long lasting affair but considering it is part of the PSP Mini range this matches the concept perfectly. Well worth a look inbetween bouts of heavier games. Entree, or aperitif, Echoes would work as either.

You can support Jen by buying Minis: Echoes