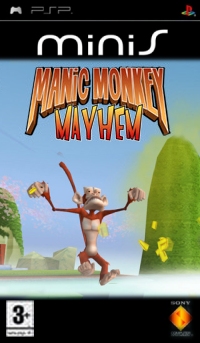 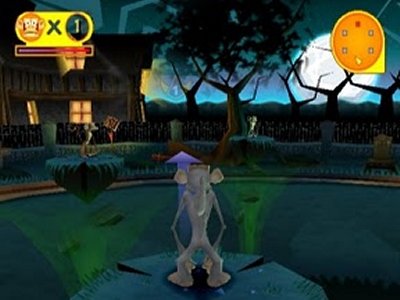 Manic Monkey Mayhem PSP sounds exciting frantic and fun, but isn't. It's rather shallow and lacking any real spark or vibrancy. Offering no storyline or variety in its game play, it wasn't long until it was cast aside in favour of more enjoyable pastimes.

A distraction from more emotive games was just what I needed when I was struck down by a nasty strain of flu. I didn't want to play anything that would challenge me mentally. I just wanted something that would pass the time and hopefully distract me from my malaise. Manic Monkey Mayhem served this purpose just fine at first but it wasn't long until I pined for more depth.

Pleasingly, Manic Monkey Mayhem may feature monkeys but it's relatively low on mania. It is occasionally quite chaotic but more infuriating when your reflexes let you down. You play a monkey standing on a podium who must throw bananas at his fellow monkeys. In turn they throw bananas back at you so much of the time is spent trying to dodge the projectiles.

That forms the crux of game play. It's really not very complex in any way. Each stage of the campaign is one of three different types of level. Some are one on one battles, while others are against many monkeys at once. There's also a time based survival mode. All of these stages are the same though really, you have to throw bananas at your foes to knock them off their perch.

While it was quite fun at first, it quickly became repetitive. The controls are very restrictive so all you can really do is move left or right to dodge incoming bananas while you throw bananas back at them. While a campaign mode sounds thrilling, it's just the same thing over and over again. Even in my flu-addled state, I needed something more intellectual to keep my attention for any length of time. It wasn't a game that I would normally play for any length of time and I'd quickly learnt why this was the case.

It had spent what precious little energy I had and it really wasn't worth it.

On the plus side, Manic Monkey Mayhem did provide me with some rather surreal dreams as I found reality and games overlapping during my feverish sleeps. I wish Manic Monkey Mayhem had a multiplayer mode as I think that would have been quite good fun. As it stands though, playing against predictable computer players was just boring after a while.

Manic Monkey Mayhem disappointed me. I hoped for something frivolously cheerful and fun. Instead I was simply bored by its shallow nature. I found myself putting it aside in favour of reading a book. It had spent what precious little energy I had and it really wasn't worth it.

You can support Jen by buying Manic Monkey Mayhem