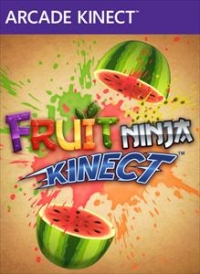 Other GamePeople columnists have reviewed this from their perspective - huh?:
Family Podcast (360) 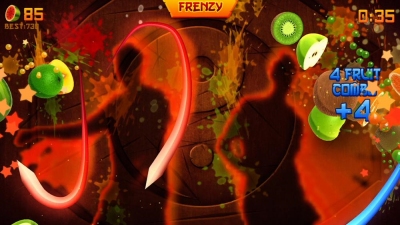 Fruit Ninja Kinect sounded like a bit of a gimmick. Once I had been persuaded to stand up and play, I got into the silliness and found it to be quite a lot of fun.

Having inadvertently picked up an Xbox 360 Kinect bundle at Tesco (how does that happen?) I now had to face the trickier prospect of being coaxed into gaming by the rest of my family.

I'm much more comfortable playing a game on an iPhone or iPad than joining in with something in the living room. For a start there's usually something else I'd rather do when it comes to family play time, books, films, cooking all feel like a better use of my time - particularly if I can involve the kids.

Having sat out a few founds of Fruit Ninja, I had to show willing and give it a go. This is the game I've played on the iPhone (and a friend's iPad) where you have to slice up fruit with your fingers. Although on Kinect you do it with your arms and legs rather than digits - something the kids seemed to take as an invitation to play air-karate.

My approach was a little more conservative -- accuracy over speed I told them -- and I was happily surprised to find it meant I could quite easily beat them. This is something of a rarity in our house where a quick go on something is usually all I need to establish it's not for me.

I actually got quite into it.

Winning at Fruit Ninja on my first go, was enough incentive to play some more. I actually got quite into it. As you progress there are different power-ups and levels you can try. We particularly enjoyed the two player games where you work with (or against) a person stood next to you.

The best part of all this was the Kinect controls. You don't hold anything, and instead stand in front of the Kinect camera. This works better than on some other Kinect games I've tried like Dance Central because you can see your actual outline filling the screen.

This worked really well -- provided we could stop our youngest (3) from running in front of the screen and giving the camera a bit too much to cope with. We don't have the largest lounge, but there seemed to be enough space to play this. Some other games keep asking us to step back -- which would only be possible if we went next door.

Fruit Ninja was an energetic and involving way to spend an afternoon.

I would have liked to have had more of a story in the singleplayer game -- which I should admit I played more of after the kids were in bed that night. I also think the music could be more interactive, and maybe effect how the game plays. I really like Elite Beat Agents on the DS and combining the two would be a really interesting idea. Come to think of it Elite Beat Agents Kinect would actually be something I'd love to play.

I'm still not totally convinced about the Kinect controller, but have to admit that Fruit Ninja was a nice energetic and involving way to spend a recent Autumnal afternoon.

You can support Josie by buying Fruit Ninja