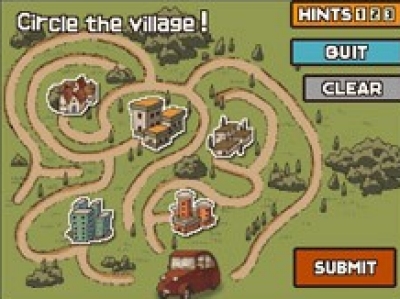 Professor Layton's first curious outing impressed me with both quality and storytelling. The games really feels like a 50's french mystery. If I can find the time and the brainpower, perhaps I'll finish it in time for the follow up - Pandora's Box.

I first played Layton on holiday in France. The kids had their DS's all loaded up with games and suddenly had no TV, no PC and nothing to do! Don't get me wrong, this was very nice , but after a few evenings twiddling my thumbs I asked my other half if he'd brought any 'grownup' games. Luckily he had and pulled out Professor Layton.

I wasn't sure how much I'd enjoy this. Having tried puzzle and hidden object games before like the Mystery Case Files series, I was expecting something similar. But professor Layton and the Curious Village was far better.

I settled down one evening with a glass of wine and my daughter's DS and set to work. First impressions were that this is a really good story, more than just a token background on which to loosely base the game. This becomes a genuine part of the game - really readable, intractable and enjoyable.

My daughter was great at helping me with this one, in fact there were about three of us around the DS at one point trying to solve it.

The location also makes up another important aspect of the game. Navigating around the Curious Village is an integral part of finding clues and solving your mystery. You talk to different villagers to gain clues as to where to go and how to solve the overall mystery. But at each step you get a puzzle to solve. The puzzles are great, really taxing on the grey matter and lots of different sorts for those that like numbers and those that like riddles. You can buy clues to your puzzles, but your credit is only limited so use it sparingly.

One of the most memorable puzzles is the old tale of ferrying wolves and chicks across a river. You have to carry at least one per crossing but too many wolves to chicks on either side or on the raft and the chicks get eaten. My daughter was great at helping me with this one, in fact there were about three of us around the DS at one point trying to solve it. A real family game experience, even on a DS, which is unusual.

Another puzzle that really got me stuck was a riddle about candles on a table and how many would be left at the end of the night. After trying to be clever and work it out mathematically I realised the answer was in the riddle.

This illustrates the variety of puzzles included. It's ideal to get the rest of the family involved to help, there really is a puzzle for everyone. My husband was great at helping me with the more mathematical ones, which I'm not very good at. You also get a space to make notes on some of the word puzzles which is very handy and saves needing to use pen and paper along side the DS. No extra points for showing your working out like you could at school though!

It sold out when first released because it was so popular.

I did find it all a bit taxing after a while, there was a limit to my brain power of about an hour - this of course might just be me. After that I found I just wasn't enjoying it anymore or was just buying lots of clues so I could solve the puzzle. This game is much kinder than others though, letting you skip puzzles move on with the game and come back to them later. I think this may just be delaying the inevitable agony of having to face them later!

There are loads of puzzles in this game, and more you can download for free. It sold out when first released because it was so popular, so you will have to be on the ball if I want a copy of the sequel - Professor Layton and Pandora's Box (Diabolical Box in the US). I just need another holiday now so I have time to play some more!