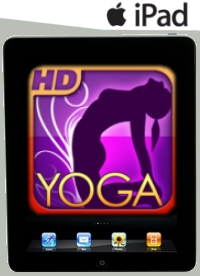 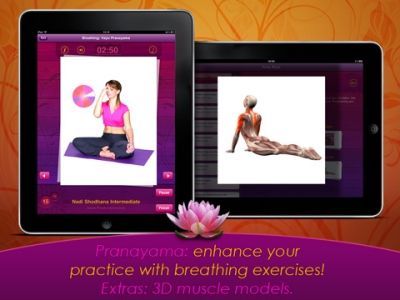 All-in Yoga HD offers an accessible and cheap way to get into Yoga. Both my daughter and I have enjoyed the customisable routines and clear explanations.

I'm pretty new to Yoga and knowing that I'm a fairly faddy person, especially when it comes to exercise routines, I figured that forking out for a DVD may well be a waste of time and money.

Luckily my lovely geeky husband pointed me in the direction of some Yoga iPad apps. We are quite new to the world of the iPad and to be honest it probably hasn't really had as much use as it could in our house.

The kids have played games on it and I've used it for the Internet when my iPod touch has just been too small and annoying (I seemed to have ended up with the first generation family cast off again) to see what I'm doing. I wasn't very convinced that any exercise programme a fairly tiny screen could be any good.

Getting All-In-Yoga setup was straight forward. The app has a really nice feel about it and is simply laid out with out being over complicated. It has options to tailor your own routine according to your needs, choose from poses or go with a pre-done routine.

I think I mentioned that I'm new to yoga, so I have no idea about how authentic this is in terms of the proper traditions of practice. But there is nice calming music, pictures of the poses and nice clear explanations.

I chose to do the 15 minutes Sun Salutations first -- with my eight year old daughter who got very into looking serious about the lotus position. It was pretty good; the iPad was on the coffee table at our head height, so we could see what were supposed to be doing.

The movement and breathing you do from one pose to the next is all part of the ritual.

At first the woman's intro and what the man said were a bit confusing, but then we worked out that she introduces the poses before starting - telling you what to do with your limbs.

Today I did a 55 minute routine, which was pretty tough in places. Don't think that Yoga is all about stretching and breathing, my arms were screaming after a few Downward Dogs. I felt like I'd done a proper work out by the end.

The programme takes you through a sequence of poses and ends with stretching and relaxing (and breathing of course). The only thing I found tricky was not knowing how one pose was supposed to flow into another.

From my limited understanding of Yoga the movement and breathing you do from one pose to the next is all part of the ritual, and this felt a little bit lacking. I'm sure with a bit more understanding I would know how to do this, I think this is where perhaps it would be good to have a bit more knowledge or experience.

Don't think that Yoga is all about stretching and breathing, my arms were screaming after a few Downward Dogs.

For GBP 2.99 it's pretty good. There are only a few technical hiccups like the voice over for the wrong picture occasionally, but these weren't so wrong that it was confusing. It was just leg-on-the-floor-lunge or leg-off-the-floor-lunge. Both were agony anyway.

I would also have liked to be able to pick my own music for the workouts, and had some sizing options for the landscape view. But again these are minor things when you consider the price.

Compare this to a DVD that offers just one routine and the iPad route seems like a much better option.

You can support Josie by buying All-in Yoga HD