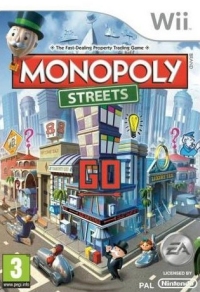 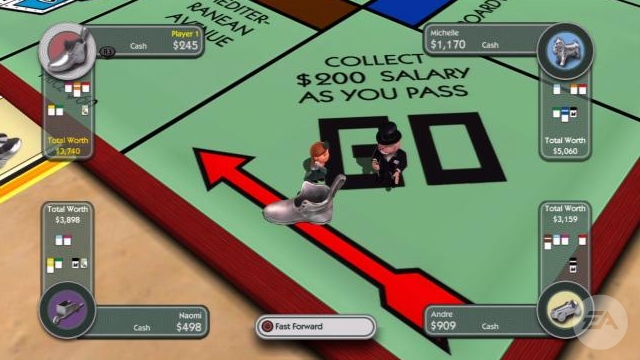 Monopoly Streets adds a little Sim City reality to the classic property trading game, but still doesn't quite make sense of playing a board game on the Wii. I'm still looking forward to playing the real thing with my kids.

Monopoly conjures up all sorts of family memories for me. From playing with my brother and sister before I quite knew what was going on, to becoming savvy enough to know I had to raid the bank early - before anyone was watching.

Monopoly is a game that has lasted a long time because it works on so many levels. Kids can simply go round the board collecting cards, while grownups can work out their own strategies. And at a very basic level you're not playing against the game itself but the other players.

Different people will swear by different strategies to win. Some will insist you should buy all the property you land on while others suggest you focus your efforts on building sets. Then there are those that play a more disruptive strategy looking to collect cards that other people need, for leverage later in the game.

My kids aren't really old enough to stick out a whole game yet, but I'm looking forward to rainy afternoons spent round the board in a few years time. With this in mind I was a little wary of last year's Monopoly (Wii) game and this revitalised Streets version. I didn't want the electronic edition to stomp all over the simple joy of a line of matching property cards, money and those red and green symmetrical plastic houses.

The Wii game does a good job of creating the feel of a physical board, and with Streets you can opt to play from a street level view. Regardless of the presentation though, this plays the same as ever. Players roll dice and work around the board, buying properties as they go. Other players who land on their properties pay rent dependant on the value of the property and whether it has any houses or hotels.

The setup may be slow, as players slowly accumulate different lots and draw lines of competition against each other, but things soon snowball towards the end. Once the wheels of the game are fully in motion and all the property has an owner, the real cut and thrust of transactions begin. There is something satisfying about bargaining a player (in a financial spot) out of the property card that completes your set, and doubles the rent you can collect, even if the other player is your daughter.

There is something satisfying about bargaining a player out of the property card that completes your set, even if the other player is your daughter.

But unlike the physical board game you can play Monopoly Steets against friends and family online - something the kids' grand parents are actually quite excited about as they live some distance away. As well as adding the online mode, Monopoly Streets also provides some other ways to play the game. I particularly like the Bull Market mode where all the property is bid on right at the beginning, and then you play for just 20 rounds. Not only do things hot up a lot quicker but the round limit also makes each move more significant.

As well as Speed Die (which adds an extra die) and Jackpot (which substantially alters how properties are built upon) you can also make up your own versions of the rules. Fancy increasing the Luxury Tax or instigating the Free Parking money pot or even increasing how much Passing Go is worth, you can simply make your own game up and save the settings for later.

I've always liked bidding on property in Monopoly, but on the Wii this takes on a whole new level of intensity. Each player can increase or decrease bids in real time, with a short time limit. As time slowly runs out those that want a property rapidly increase their offer in the hope of snagging the street. I enjoyed playing chicken with other players during bidding, to see how high I could push things.

We were looking forward to using our Miis to play Monopoly but this is something you have to earn in the game.

There are a range of different boards you can choose from, although many of these have to be won by doing well in the classic game. I would have liked all the different modes and boards to be unlocked from the start. In particular we were looking forward to using our Miis to play Monopoly - as pictured on the box - but again this is something you have to earn in the game.

On balance, Monopoly Streets doesn't really add a lot to the game, but then it doesn't really need to. I'm kind of thankful as this means it has done enough to introduce my kids to how the game works, but has left them interested enough to still want to try the real thing.

You can support Josie by buying Monopoly Streets