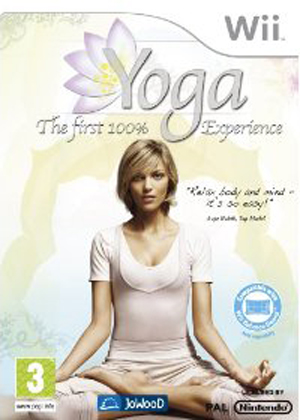 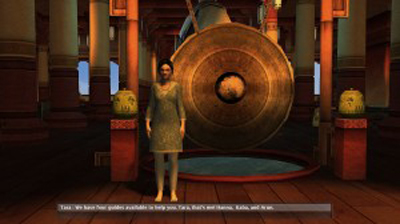 Wii Yoga sets out to offer the hardcore Yoga fan an authentic at home experience, enhanced by the use of the Wii and Wii Fit board. Although there is plenty here to challenge and stretch, for newcomers like me it's all a little daunting - and doesn't all that pretty.

As a busy mum I would love a bit of time to sit down, breath, stretch and relax. I've always liked the idea of Yoga and it seems like the thing that would compliment my other love - running. Running tends to feel quite hard on the body and also makes me a bit hyper - to much adrenalin coursing around my body! So something that brings a bit of balance would be nice. As ever I don't have any spare evenings to go to a Yoga class, so being able to do some at home seems ideal.

The game offers a story mode, which takes you through some of the background and history of Yoga. There is a section where you can learn each of the postures individually or you can do combinations of exercises tailored to different problems, like colds, or back pain. The game uses the Wii-Fit board and Wii-mote to determine your balance and stability. Although when plying it for the first time I was not prompted about using either of these, so didn't realise I could until I spotted it on the box information.

I have to say I was rather disappointed with the look of this game. The box (and the nice lady on it) give you the impression that the game will be minimalist and calm, but in contrast the colouring of the Yoga backgrounds are busy and brash. The game is probably aimming for an authentic 'eastern' Yoga feel, but it wasn't really what I was looking for. I had hoped it would be more sleek and simplistic. Similar to the Yoga exercises on Wii fit, which I really enjoyed, with their ambient music and the sound of the in and out breath to guide your own breathing. The nice lady on the box - a famous model apparently makes a very brief appearance in the acual game, but I'm not sure of her purpose, as for most of the game you are guided by computer animated gurus.

If you are seasoned Yoga goer then I think you might more out of this than me. I think I neeed to start with something a bit more basic.

These guru's who take you through the Yoga story mode and postures rather remind me of the odd blocky figures I see in my husband's fighting games (Tekken he says one is called). I half expected one of them to pull out a rocket launcher and start shooting zombies.I have no idea why they chose such poor graphics to accompany what could been a really good Yoga tool. There are also some very dubious acents as well. On the plus side, you can change how you view your Yoga instructor; from the front, back or side. You can also watch in demo mode or you can choose to try out the postures for yourself.

A lot of the moves are pretty hardcore. I did try one and ended up flat on my face, I was supposed to be balanced on one hand and one foot with the other arm up in the air. I think a bit more practice needed for me.

If you are seasoned Yoga-er then I think you might get more out of this than me. I need to start with something a bit more basic. The only other game containing Yoga on the market - Wii fit plus, only offers a limited number of Yoga postures and from what I have heard from people who do a lot of Yoga, it misses out a lot of the core priciples, like the Savasana, or Final Relaxation Pose, which is an important way to finish off. Also many of the postures are done in a stand alone way, not put together in a flow of movments as they are in this game.

You can support Josie by buying Yoga