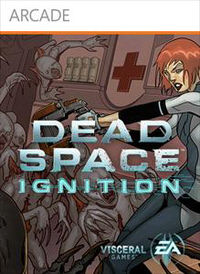 Further reading:
Choose Your Own Adventure 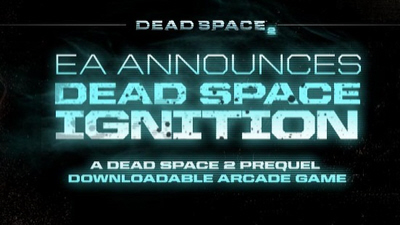 Dead Space: Ignition 360 is an enjoyable graphic novel teaser for next year's sequel. Despite its mainly passive nature, the voice acting and minigames serve up another interesting look at a fiction that is close to my heart.

The original Dead Space followed the events of engineer Isaac Clarke as he battled against the infected crew ofthe USS Ishimura. The impending sequel moves the game to the moons of Saturn and Dead Space Ignition acts a prologue to the events in that game. This downloadable title is an interactive comic book with some fun minigames, which is a very novel experience for console gamers.

The Dead Space series despite under performing at retail has already explored many different formats to build its narrative, including a graphic novel and an animated feature. These have explored the back story - the Church of Unitology and its religious zealotry playing almost as big a role as the necromorph infection. The Dead Space series has replaced Resident Evil as my go-to game for survival horror love this console generation and so I eagerly await any new entries.

Though barely a game, the presentation drew me into the characters and the worsening situation on the station.

The comic book follows the events of engineer Delille and enforcement officer Andarsyn who are caught up in events at the beginning of the infection on The Sprawl, which is Isaac's destination in Dead Space 2. Their romantic involvement adds some colour and tragedy to their adventure.

The animated comic strip, which is fully voiced is interrupted at various pints by one of three minigames, which "simulate" tinkering with the station's electronics and computer systems. These consist of a tricky race, a tower defence variant and a game involving coloured lasers and mirrors.

The tower defence game is passable, the racer is tricky, but my favourite was the light and mirrors puzzle. It might be a design that has been used countless times before, but I still enjoyed trying to use a limited number of reflectors to direct my coloured lasers. Each time the minigames appear new features are added and this kept them interesting.

Strangely, though barely a game, the presentation drew me into the characters and the worsening situation on the station. This could of course be because I'm already so heavily invested into Dead Space lore, but even so, the voice acting is engaging and the interactivity is well paced. Just when I might have stopped concentrating there was the next puzzle to solve.

The prospect of what I'd missed was always tantalising.

Obviously, without direct control of the characters, this isn't a game about role playing, but you do get to make the odd decision, giving you a few different routes through the story. Once you've played through that admittedly short story, you can then play the other paths or just watch them if you don't fancy playing the games. This was a really nice reward allowing me to see the effect of each of the decision points and reminded me of the Choose Your Own Adventure books, which offered a similar experience. I would try not to cheat, only looking at the alternative options once I had reached a satisfying end, but the prospect of what I'd missed was always tantalising.

Ignition has warmed me up for the full game with its surprising ending. For those that haven't experienced Dead Space before I worry that the simple mechanics and rough art style will put potential fans off because of that aesthetic. All of the fiction outside of the main game has been drawn in a unique style that is probably the antithesis of what's expected in this HD generation. Whilst those like me that read graphic novels are appreciative of this freedom of expression, this is not the audience that needs attracting in order to make Dead Space 2 the success required to continue the series.

Dead Space Ignition is a mixed blessing - great for fans, but off-putting for people attracted by the flashy visuals of retail releases. Dead Space Ignition therefore would serve better as additional content in a special edition, rather than as a paid for teaser. That doesn't mean I didn't thoroughly enjoy my time with the characters in this unique console product.

You can support Jon by buying Dead Space Ignition