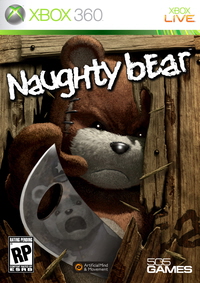 Other GamePeople columnists have reviewed this from their perspective - huh?:
Teen Gamer (PS3)
Tech Gamer (PS3) 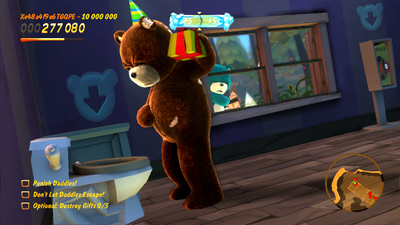 Naughty Bear 360 looks cute but plays mean - encouraging you to push your weight around in this colourful, but shallow bear 'em up. Despite the interest generated by its visuals, it offers very little for those that like dressing up, other than a few fetching hats.

Naughty Bear has one gimmick - extreme violence at the teddy bear's picnic. You will experience bear on bear battles and you will literally knock the stuffing out of the other stuffed animals. The reason for your brutality is that Naughty Bear hasn't been invited to other the birthday party. To be honest, with a name like that it shouldn't have been a great surprise regardless of how many times he went down to the woods. Perhaps a change of name might have prevented such wanton spilling of foam.

To exact revenge for your injustice, you set out to "punish", which in this case means killing the other unfortunate bears enjoying their jelly and ice-cream. To make this carnage into a game, you scare, trap or just thump your fluffy friends with points awarded for the naughtiest activities. It's at this point that my wife took a genuine dislike to the game, asking me, "Why are you being so horrible to the others?"

I may be wearing the clothes of cute childhood stories, but my actions are those of a depraved madman.

This is a question that I had to ask myself too as the violence is somehow made worse by replacing a space marine by Roosevelt's best friend. I may be wearing the clothes of cute childhood stories, but my actions are those of a depraved madman. Six-inch knives and soft toys are not items that I wish to see together in a game, whether my revulsion is rational or otherwise.

Had this game been in a real world setting it would have attracted the attention of the tabloids. As it is, the PEGI 12 rating doesn't sufficiently warn you of the acts of cruelty you partake in and for me this is even more disturbing since the violence is as graphic as in any video game. Lack of blood doesn't make beating virtual actors to death with a truncheon any less horrific.

Despite my unease, I hoped my actions were at least grounded within a story that would develop my character, even if it was a Grimm fairytale, rather than pleasant bedtime reading. This though wasn't the case, since at its heart, Naughty Bear is a score-attack game - each level rewarding the chaining of "naughty behaviour" with an escalating score.

If this is the raison d'etre for Naughty Bear, then I think it misses the point of why this can be such a compelling type of game. The best examples give you perfect pacing with levels built for balletic movement providing constant scoring opportunity - risk and reward in harmony. Instead, Naughty Bear provides stop-start progression with levels that are disjointed and feel like a chore to stay and score on. Initially, I had fun, but once I'd seen the stuffing fly a few times I just got bored.

I expected my visit to toy town might let me play the role of a wronged teddy bear, but in reality, lack of any narrative or compelling game play left me disappointed.

Naughty Bear fails to provide variety with each level being essentially the same. The introduction of army bears and zom-bears later on did bring a smile to my face, but didn't change the game play in any meaningful way. But I was left wanting a greater variety of options for interaction or at least something more meaningful than the same tired gag.

I expected my visit to toy town might let me play the role of a wronged teddy bear, but in reality, lack of any narrative or compelling game play left me disappointed, with only the act of whacking pink teddies for entertainment.

After watching the initial trailers I wasn't expecting the next Halo, but this falls way short of its potential. Perhaps Naughty Bear's lightweight approach would however better fitted a downloadable title, where my expectations would have been more in tune with its arcade sensibilities.

You can support Jon by buying Naughty Bear