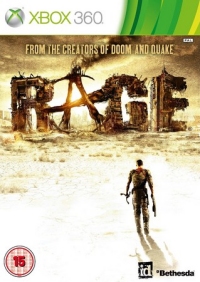 Other GamePeople columnists have reviewed this from their perspective - huh?:
Story Gamer (360)
Scared Gamer (360)
Family Podcast (360) 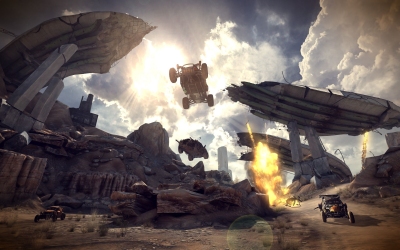 Rage isn't the role pay adventure it sells itself as. But beyond this pretence is an exquisite shooter with as much craft and creativity as you could want.

I'm a Fallout person, straight and simple. I love getting kitted up and facing the windy wilds of an open world. I love seeing a building on the horizon and trekking there to see what lies within. As I started Rage and wandered stumbling into the post apocalyptic world I couldn't have been happier.

The gate of the Ark slowly opens and you team up with one of the locals - a leader from the first settlement you find. He leads you out into the wasteland as the quests and travelling begin. This is familiar territory as you build up your weapon stash and geographical understanding of the locality.

But unlike Fallout, Rage does much more to excite you where you are - rather than offer enticing outbuildings in the distance. I soon found that I didn't have to work so hard at crafting a character for myself. This is more like Borderlands, where the person you play and places you visit are carefully choreographed to fuel action as well as role play.

This is all the more evident when you reach larger settlements like Wellsprings. What looked like a massive open world is actually much smaller, much more interesting, and a much richer source of game play goodness than that.

Rage focuses on the major towns, rather than the unpopulated outback. I was happy to stay in character though, and keep my attention on the old-time metropolises rather than what lies between or beyond. The landscape became a backdrop rather than a active participant - but that was ok with me.

In terms of quality, Rage couldn't be more varied. The driving and racing sections audibly creak with overly basic driving mechanics and repetitive races. Although you can upgrade your vehicle I struggled to want to spend much time tinkering.

The sheer theatre of it all meant I was more than happy to go along for the ride.

The gun-play however is simply stunning. It's telling that id's history is with games like Doom, Wolfenstein and Quake. There is real craft to the shooting so that even a character loving player like me was more than a little impressed.

The range of firepower, each with alternate fire, is both diverse and enjoyable. There is a heft to these weapons that makes you want to go and shoot things. But more importantly for me, each of them had purpose -- through the game you have to use pretty much all of them at some point or other.

A big improvement over previous shooters from id is the enemy movement and tactics. This used to be more artificial than intelligent, but happily now does more than enough to fool you into thinking you are fighting real people.

While this got a little frantic at times, and relies more on reaction time than strategy, the sheer theatre of it all meant I was more than happy to go along for the ride. And it looks so good you could almost just sit back and watch Rage. In fact at times, upon entering a new area I did just that, stumbling around taking in the brilliance of what had been created there.

If I had a criticism is would be that Rage lacks real variety. The missions all function in pretty much the same way. And the story itself, which cycles through the same clutch of locations, doesn't do enough to really change things up.

This story has real potential, but never really capitalises on it. I loved the idea of the omnipresent Authority that people cautiously talk about through the game. It's a theme that gives a brooding uneasy edge to what I thought might happen. But, like talk of a impending asteroid collision and secret experiments, these ideas are left flapping in the wind and never capitalised on.

It's just a shame id felt they needed to dress it up as something else.

Rage works better in co-operative online multiplayer mode. Here, the pretence of a story is dropped and you play through a series of anecdotes culled from the wasteland. Playing these with a friend creates a much more focused experience, with real moments of drama. The simplicity of points for kills and score multipliers are a much better incentive to up your game than the meandering story of the main game.

I really enjoyed Rage, but to do that I had to wade through too many trimmings. I found that I needed to set aside my desire to role play, or get into character. This is a game that excels in looking great and creating a finely balanced shooting experience. It's just a shame id felt they needed to dress it up as something else.

You can support Jon by buying Brutal Legend