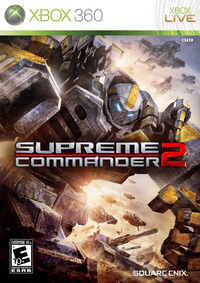 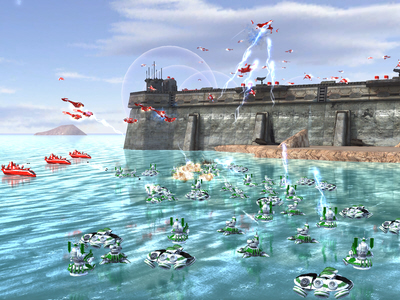 Supreme Commander 2 360 tries everything to make its real time strategy work on a console. But even realistic units and massive battles fail to compensate for controls that hamstring your orders.

I used to love PC real time strategy games like Command and Conquer and Red Alert - before overly complex technology-trees confused me. Nowadays I don't own a PC capable of running those games, so the 360 version of Supreme Commander 2 was an interesting step back into the world of clicking to kill.

The original Supreme Commander was ported to the Xbox 360, but with huge technical issues it was virtually unplayable. The sequel has been developed exclusivley for 360/PS3. Becasue of this it runs smoothly and has controls optimised for the joypad. A nice touch is the ability to zoom-in from a view of the whole battle right down to soldier head height.

Disappointingly, despite the extensive hand holding, some of the more advanced controls are hidden away in the manual. For example, I didn't discover the ability to queue commands until I was well into the third campaign. It was a real shame that this vital piece of information wasn't imparted from the beginning, since it significantly improved my experience. Suddenly, I was less Custer and more General Lee as I watched my automatons marching about carrying out a series of orders.

Supreme Commander 2's story follows the events of the PC only expansion, Forged Alliance, but set 25 years later. The three emerging factions form the basis for events here. Plot is driven via video conference style conversations and the inclusion of a few key characters provide just enough of a wrapper to allow me to engage with the action.

If you're going to really dressup like a general, making difficult military decision should be part of that drama.

One of the joys of playing a new Real Time Strategy is experiencing and experimenting with the new units and in Supreme Commander 2 this is a real highlight. The lumbering Cybranasaurus Rex or King Kriptor robot dealt the kind of destruction I might have imagined whilst watching those 1950s science fiction films. Death rays punctuate an unstoppable march into the enemy's base.

To unlock these monoliths of destruction requires spending of Research Points in a very extensive Research tree, giving the battlefield commander great latitude for developing armies with different focus.

With each new battle, I have to research from scratch, which means I am free to manage each conflict differently, but from a real world perspective it's just plain silly. A better approach would be to force me to prioritise deployment by limiting the number of units available. If you're going to really dressup like a general, making difficult military decision should be part of that drama.

The UEF campaign can be played through in a couple of hours and didn't really stretch me. The Illuminate and Cybran Nation campaigns are more difficult, but it still felt a lightweight experience, in place simply to introduce me to multiplayer.

Here the stabilisers are off and you are free to just build your armies with an objective of obliterating real or AI opponents.

If the brief campaigns leave you wanting more, then the skirmish missions are possibly where you should be spending your time. Here the stabilisers are off and you are free to just build your armies with an objective of obliterating real or AI opponents.

This was where I would spend most of my time in Real Time Strategy games and it's still a lot of fun, but on a console I couldn't shrug the feeling that I was shackled by my controller. Without the option to easily select and jump to groups of units I often felt like I was flailing around losing track of the battlefield. Performing such an impotent part in proceedings was a difficult role to play.

For someone that used to enjoy this genre and lost many a university study session to multiplayer mayhem, Supreme Commander 2 sits in a difficult spot. The sheer number of permutations the research element introduces is a step too far away from the template I know and love. Couple this with the controls and the sad result is that the console remains an unhappy place to play at being an armchair commander.

You can support Jon by buying Supreme Commander 2