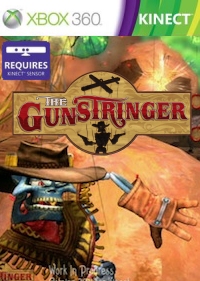 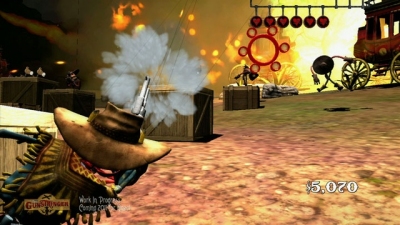 The Gunstringer does more than disguise its on rails shooting with theatrics, it creates an involving experience that grants genuine emotional ownership of its Pelham Puppets.

As games push the interactivity envelope, The Gunstringer asks whether you are you the puppet or the master. Although ultimately still an on rails shooter, it blurs the boundaries in a theatrical and interesting way.

The scene is set. You are the director of the action, but also the main character. As The Gunstringer opens, you watch the machinery of the stage fall into place. The audience enters and sits in anticipation, expectant for the action to start and the story to be told. The props and set are positioned behind the curtain, and everything is ready.

A sense of expectation builds as this all comes together: expectation of the story, wanting to know what this is all about and what shape the tale will take.

The atmosphere established by Twisted Pixel is reminiscent of many of their other games -- 'Splosion Man and The Maw. Always quirky and fresh, they seem to revel in creating aesthetically interesting worlds and playing with that within the story arc.

But once the scene was set and the houselights go down, it’s you who are in the spotlight, playing the main role as The Gunstringer. In another clever nod to the theatrical world, your thoughts are narrated as you moved an inner dialogue writ large for all to see commenting on your action, choices and, at times, mocking your mistakes. This light-hearted voice feels warm and revolutionary as it lends your role the sort of easy humanity often missing in games.

As you wave your arms in front of the Kinect controller to jump, dodge and shoot you are rewarded with cheers. The audience is on your side, spurring you on, booing at my enemies and applauding my victories. This is a story of revenge, your old gang had turned on me, and you set out to search the world and get payback.

You can't let the audience down.

Swishing yourself left and right with the simple Kinect controls you use your gun to tag enemies before trigger your six shooter. It’s frantic and a little tiring, but the sense of commitment to proceedings means you are happy for the show to go on. You can't let the audience down.

This feeling grows through the game, building and ebbing as you fight your way through the story. The clever twists and ending really keeping you involved in the action.

I loved the way your name comes up as the star at the beginning, and how you have to raise The Gun Stringer to life from the grave to start the action in each new chapter. It really made me feel in control of the action.

This attention to detail, this atmosphere and this sense of story pulls you in and makes you feel like you are in control. But in reality this is a very closed, corridor shooter, in the spirit of Time Crisis or House of the Dead.

The Kinect controls pull you further into the action, but you are still on a preset, path -- the story passively rolls over you. Even so I couldn't stop playing. I wanted to know what happened to our hero and whether I could save him.

The Kinect controls pull you further into the action.

The care put into the surrounding world, the subtle - and unsubtle - jokes, the design work, the breaking of the Fourth Wall and all the extra work put in by the development team is really what makes this the most compelling game I have played on the Kinect.


You can support Jon by buying The Gunstringer