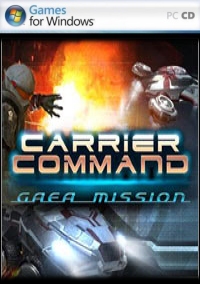 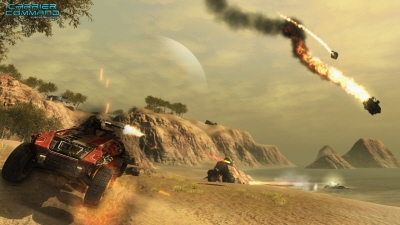 Carrier Command Gaea Mission PC updates a much loved classic mixing both real time strategy and first person vehicle combat with modern touches and a cutting edge engine. The commanding role it creates ensures it's not just for the retro gamer.

Carrier Command is a remake due to arrive almost twenty five years after I was first blown away by the original's smooth vector graphics on my Commodore Amiga. Whilst viewing Bohemia Interactive's labour of love didn't quite have that same effect, I was still filled with anticipation, eager to take control of a Walrus tank.

Unchanged from the original, Gaea Mission hands you command of a futuristic assault ship, complete with a squadron of aircraft and a fleet of amphibious vehicles. With these tools you assault the enemy and island hop your way to victory with a combination of aerial assault and beach landings all the protecting you your supply line.

Watching the action move from a tactical drop down view, to a remote camera following my squadron to a cockpit view that ultimately hands me the controls, the feeling is still thrilling. Whilst it might not offer the level of realism of Bohemia's Arma series of games, the ability to mix tactical planning with hands on combat combines genres I've always loved. I seem to swing between the role of master tactician and ace pilot and in Gaea Mission I can be both -- or of course neither should my plans collapse in failure.

Actions are planned from the ship's command and control centre and from here your squadron of aircraft can be sent on combat air patrol, whilst your land vehicles can be sent ashore following your way points to capture terrain.

By careful deployment further expansion across the archipelago becomes possible. Vehicles will be offered in different classes such as specialists in anti-aircraft operations as well as just light and heavy variants that will trade manoeuvrability for survivability. So, not only will you have to plot your way points and monitor the outcome, but you will also need to field the right hardware to make sure you're not left at a critical disadvantage.

I was first blown away by the original's smooth vector graphics.

A recreation of the original game will also be included, pitting two carrier commanders against one another, but this is bolstered by a story based campaign mode. The details of this are yet to be revealed although screenshots show menacing looking mechs.

Whilst Bohemia were keen to show off their engine and different units, it remains to be seen what it will be like to command myself. I'm keen to understand the level of autonomy afforded by the AI and whether the land and air forces will complement each other. I'd like to think that I can succeed with careful planning alone, without the need to jump into the cockpit and micro manage each stage of the conflict. The possibilities shown by the tech though were tantalising and reminded me of acronym laden MAG and RUSE.

Regardless, given the attention to detail lavished on their Arma series, I am optimistic that the right amount of time will be taken to ensure that Carrier Command role up to my memories. I've waited a long time for this spiritual successor, but I will have to wait a little longer to dress-up as this particular commander as it will ship sometime next year.

You can support Jon by buying Carrier Command: Gaea Mission