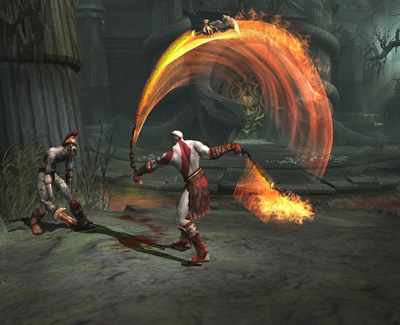 God of War Collection PS3 gives the PS2's God of War games a new lease of life on Blu Ray. Their age certainly wasn't a barrier to getting into my role whilst wearing the sandals of a Greek God, even if Kratos' motivations aren't easy to sympathise with.

God of War and its sequel are both great action adventure games and even though from different directors, they both contain the trademarks of brutal combat, enormous set piece encounters and an epic storyline with great pacing. Part one of the collection deals with how Kratos became the Ghost of Sparta and subsequently fought his once master Ares, whilst part two focuses on what happens when Kratos wields ultimate power.

If I felt sympathy for my character up to point of his own deification, his arrogance and disregard for humanity after this point made me quite uncomfortable with his continuing campaign of wanton destruction. Such is the rage displayed by anti-hero Kratos, at times I felt as if he was daring me to interfere as he sought revenge for the trickery he has suffered at the hands of the deities.

This sense of being in a role with your hands tied is entirely in keeping with the stories of the gods and their ruthless wars with men.

If only I could reason with Kratos, we might just be able to succeed without so much spilling of blood, but inevitably the most direct course of action was the one forced upon me. Interestingly though, this sense of being in a role with your hands tied is entirely in keeping with the stories of the gods and their ruthless wars with men.

Combat is both simple to pick up but extensible enough to let me grow into my own style as I progressed. Initially, the simple two button combinations were enough, but soon I was calling on the new powers I'd unlocked to even the score. Collecting red orbs from fallen foes to act as currency allows a decent level of customisation of powers and I chose to max out my standard attack moves. You could ignore those thought and build a more esoteric Kratos, turning enemies to stone or shaking them with earth tremors.

The staging is amongst the most breathtaking I've seen, nowhere is this more evident than in the opening scenes. Both games start with bosses that make their presence felt throughout the level, telegraphing that ultimate encounter in a way that both excited and terrified me.

These initial experiences are revisited in later levels with even bigger and more spectacular arenas, which impress on you your own insignificance. This is then accentuated as the camera pulls back, leaving Kratos as just a few pixels high. It was simple but very effecting in how I could relate to this role of mouse versus titan.

As someone that wants to embrace their character, the actions of Kratos make it difficult to come to terms with his onscreen actions.

God of War, like any great operatic theatre, invites spectators - even from those usually uninterested. Whilst climbing the infamous wall of revolving blades, which punish failure by dumping you back at the start, I ended up with a small crowd of cheering friends and family. Experiencing their euphoric shouts as I finally crawled my way out of Hades after many attempts, elevate these games above the standard hack and slash titles.

Both games shine bright in their genre and it's difficult to choose between them. The tightness and the pacing of the first game, gives it the edge for me. It felt like the perfect balance of combat, exploration and puzzle solving whereas the sequel sometimes threw too many foes at me, never letting me enjoy just being in the world. The puzzles themselves were also more integrated into the levels in the first game, with the Pandora Temple puzzle in the first game, taking up the entire level and several hours of play.

As someone that wants to embrace their character, the actions of Kratos make it difficult to come to terms with his onscreen actions, but there is seldom time to reflect on this as the next set piece assaults the senses. I was never comfortable as the ashen warrior from Sparta, but that could well be what the developers wanted from me. If you love well made games that take you to exciting places, this collection is an absolute steal.

You can support Jon by buying God of War Collection