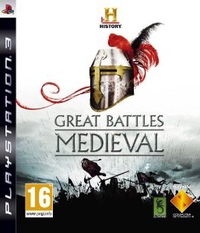 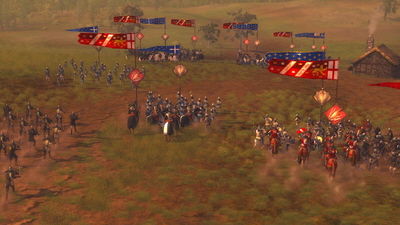 Great Battles Medieval PS3 fails to connect drama and history. Despite its educational credentials and an interesting take on simulated warfare, a lack of theatre prevented me from living and breathing the story.

A real time strategy game beginning during the 1300's, Great Battles Medieval follows the events of the 100 Years War. This territorial conflict which took place between the English and the French was primarily about settling the claim to the French thrown. You can play as either side in events throughout the period and get to raise and equip an army as you try and change the course of history.

The historic setting is explored through cut scenes that mix footage with computer graphics before each encounter. Unfortunately, they are extremely grainy in quality and lack any insightful content. It gave me very little of the feel of taking part in the events hinted at on the back of the box. Whilst the video content could have been used to enhance your understanding of the historical context of the battles, instead they depict the odd peasant and feature an awful voice-over spoken in comedic "olde worlde" English.

The real strength of tying this game into the History Channel should have been to include real documentary programming explaining the period weapons and the way the battles played out. This would have given me a sense of whether I was smarter than a medieval noble as well as providing an interesting way to learn about this little explored period of history.

The fact that it misses its educational purpose doesn't immediately mean that it's a bad game, but it does place the burden of its worth solely on its game play.

Regardless of their setting I approach all real time strategy games against the yard stick of Command and Conquer, which, for me at least, wrote the rule book on what makes the genre fun. Whilst Great Battles Medieval is obviously very different I still hoped for a well told story featuring fun-to-use units and enough tactical depth to allow for competitive multi player, should the whim take me.

There is no real character focused story in Great Battles, and in fact I referred to Wikipedia in order to provide my own reference points for the campaign of Edward in Northern France.

But there is no real character focused story in Great Battles, and in fact I referred to Wikipedia in order to provide my own reference points for the campaign of Edward in Northern France. This is not a game that sucks you into acting in character and in the main it felt more like playing a table-top war game than taking part in history. This makes each battle a standalone event and never left me desperate to play the next one.

Where Great Battles succeeds is in providing a strategic game. Whilst I can't vouch for the historic accuracy of the units, the classic rock-paper-scissors nature of archers, cavalry and infantry provide encounters that need planning rather than rushing. There isn't the opportunity to just beat your opponent with sheer weight of numbers since infantry equipped with spears will always decimate horsemen.

You also have to fight each battle with your original contingent and without the ability to build replacements, each soldier on the field is more valuable and this is reinforced by their levelling abilities.

By succeeding in battle each unit becomes stronger and can unlock new abilities and can be further enhanced with weapons that can be purchased with the spoils of war. This role playing aspect gives your army continuity between encounters that the narrative fails to provide. By slowly improving your units and recruiting new ones you will eventually have a force sufficient powerful to take on the later encounters. By replaying previous battles you can also grind your units for even more experience adding a further RPG element, but completely breaking the illusion of a coherent campaign.

The acceptable strategy game hiding under the History Channel veneer wasn't enough to make me feel like the nobles of yore.

Another success is the ability to pause the action in order to manage your units and stack orders for your troops. This gets round the issue of making complicated controls work on a game pad. The controls though are far from intuitive and so without that ability it would be extremely difficult to maintain control.

Great Battles certainly isn't a terrible game to play, but if like me you expected the History Channel to "edutain" you with its doubtless huge archive of relevant material it's a big disappointment. The acceptable strategy game hiding under the History Channel veneer wasn't enough to make me feel like the nobles of yore.

You can support Jon by buying Great Battles Medieval