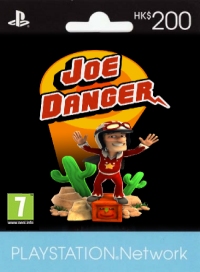 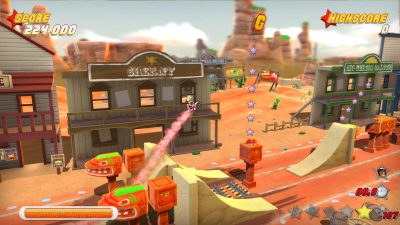 Joe Danger PS3 is a cheeky chappy sort of game, a roller coaster of bright visuals that scream fun. The points as much of the time drove me to play it again and again - as well as collecting all those shiny coins.

Whilst I've never felt any compulsion to don the bright leather outfit of Evel Knievel in the real world, doing it virtually has featured fairly regularly. Joe Danger may doth its helmet to the classics such as Kik-Start and Excitebike, but there's plenty here to justify the return of this type of fun game play to modern consoles. There may not be a role to play other than in the most superficial sense, this doesn't mean Joe Danger isn't a game of considerable depth.

The basics are as expected - you ride your motorcycle from one end of a 2.5D course to the other in the fastest time. The usual selection of ramps and obstacles must be either jumped or avoided as you skip between the three lanes of play.

If that was all there was too it, Joe Danger would be fun. But since Joe is a stunt rider you don't just need to blast through to the finish - this is all about the points you get for each stunt. Back flips, wheelies and combinations all help you get massive scores.

I've never felt any compulsion to don the bright leather outfit of Evel Knievel in the real world.

It was at this point that I realised how inadequate I was compared to my online friends. Somehow the combination of buttons required for Joe to "superman" or cheekily wave to the crowd always left me landing on my head. This was painfully driven home at the end of each race with my name consistently at the bottom of the leader board.

The collection element better suited my style of play. My dressup sensibilities mean that given the option of collecting coins or doing finger gymnastics, I'll pick up the shiny objects every time. I was happy to work through each level searching for hidden coins and mostly ignoring the stunt based objectives. Since the coins can be in different planes and you can't switch other than at specific points, you need to memorise the course - which means several runs on each level.

The ability to customise Joe's outfit and bike would have added something for the wardrobe obsessed.

If Joe Danger were the perfect arcade game, I would have liked to have been able to download my friend's runs through each level to see just how they got those massive scores. Additionally, the ability to customise Joe's outfit and bike would have added something for the wardrobe obsessed, especially if others could have watched me in clad in pink pull off some big air.

Whilst Joe Danger is a lot of fun and the number of levels and the ability to create your own courses does mean there's a lot of game to get through, it didn't have quite the same impact on me as last year's Trials HD. That might not make immediate sense as there I proclaimed the stunts too difficult, but last year's Motor-cross masterpiece played more like a puzzle game, requiring both dexterity and thought to succeed. Joe Danger doesn't have that same level of re-playability, but is great fun while it lasts, giving you the chance to act out the childhood dream of being a stuntman.

You can support Jon by buying Joe Danger