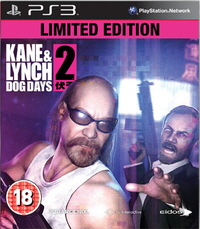 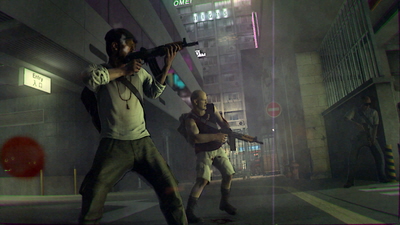 Kane and Lynch 2 PS3 dresses you up as two desperately unlikable and bloody characters. Whilst interesting to watch, with impressive graphical filters, a poor story and repetitive game play diminish any sense of reward.

Once I start a game, I doggedly stick at it until the end. Only then do I join the debate about its worth. The original Kane and Lynch was an exception, proving so unfulfilling that I put it down early. I wasn't alone in that assessment, but despite the poor critical response, the sales figures justified a sequel.

The sequel addresses many of the game play issues, providing great controls and a workable cover system. After playing the demo, I was intrigued to find out whether these great mechanics could provide a more interesting reason to become a psychopath.

Before I get to that I must mention camera effects, which I'm sure will find their way into many other games. Presented as if shot on a cheap camcorder the picture is washed out and full of pixilation and other artifacts that give it a You Tube appearance. This, together with the audio - which receives similar treatment - is the stand out achievement of Kane and Lynch that brought me closer to being there than any perfectly lit scenes could.

This shaky documentary style felt like TV and raised my expectations for a great story. Unfortunately, that story never arrives; instead you get a flimsy plot that forms an excuse for marching from one end of a corridor to the other. Even if the weapons feel great, repeating it without pause eventually grows tiresome.

I still didn't like Kane or Lynch, but calling the cops corrupt suddenly made killing them easier to stomach.

For the sequel, Io Interactive has tried to lessen the emotional disconnect and provide more reasons to care. Whilst the protagonists are hardly likeable, the plot attempts to provide justification for the required mass killing. I still didn't like Kane or Lynch, but calling the cops corrupt made killing them easier to stomach. This is obviously not a well thought through rationalisation on my part, since the rank and file officers are probably just following orders. A sense of remorse or some dialogue with the player to explain how this was affecting them might have got me more into my role, but their actions were always self serving and one dimensional.

What hasn't been toned down is the gratuity. The low fidelity somehow amplifies my unease as it made me wonder what horrors lay behind those tessellated pixels, which mask each successful head-shot. If scenes of torture with Stanley knives and the subsequent slashed bodies of the protagonists don't make you wince, then you have a stronger stomach than me - and probably shouldn't be allowed out. Some of the scenes are so powerful visually that they could have been used to enhance the emotional impact of the game, but the blood and the gore merely stir the stomach.

As well as being brutal, the campaign is also remarkably short at five hours. Rather than being left wanting more, unfortunately I was happy to see the credits. Despite this being a mechanically better game than the original, there is still not much here for those that love to love their onscreen personas.

Kane and Lynch 2 asked me to play a character I couldn't like in a world I couldn't connect with.

Kane and Lynch 2 asked me to play a character I couldn't like in a world I couldn't connect with and offered little variety to compensate for its dourness. One great idea, i.e. the graphical presentation is not enough to carry this charmless experience and neither is the multiplayer. If the sequel was about reconciling my differences with two leads, then it failed on both an emotional and a game play level.

You can support Jon by buying Kane and Lynch 2: Dog Days