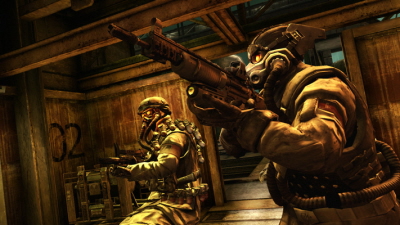 Although Killzone 2 PS3 struggled to match the hype on release, returning to it let me discover a much more immersive experience that really connected with my love of role-play. Sure it's a shooter - but the visceral world it creates makes for a much more theatrical story.

Playing games after the hype has died down is something I would recommend anyone do with at least some of the games in their collection. It can be especially rewarding if you previously played the game during the maelstrom of its release. This is how I approached Killzone 2 - in the vicinity of the announcement of a third instalment, it felt like a good time to take another look.

Killzone 2 obviously set itself an incredibly high bar when footage first rolled in a now long past E3 presentation. This was the main talking point when the game finally released in early 2009. There are still very few games that start with the punch of Killzone 2, plunging you into a ferocious war resplendent with booming explosions and millions of polygons flying about the screen.

But presentation is just a part of the experience here. Perhaps more impressive is that it also feels unique, despite the trappings of generic space marine combat. The controls give your character heft and whilst I initially struggled to tame my heavy rifle, it wasn't long before combat felt dangerous and convincing in a way other shooters seem to miss. It reminded me a little of Black at the tail end of the PS2's life.

Where the narrative fell down, the visceral reality compensated by creating such a sense of place that I could completely get into the role I was playing.

The cover mechanic in Killzone 2 was great. I could easily snap to cover, but retain enough freedom to fire over and round before moving to the next position. All the while, character movement adds to the illusion that began with pyrotechnics. This sense of immersion is partially due to inertia and partially due to the excellent camera movement, which will show hands and feet as you clear obstacles.

Killzone's sense of presence in the world is increase by your effect on its stage. With much of the environment superficially destructible the place you barrel through soon looks the worse for wear. Not quite to the level of Battlefield Bad Company 2, but the flying debris and particles made my lungs feel constricted by dust as a grenades exploded around me.

It was unusual for me to warm to a game like this - particularly where the story is stilted and hammy. But where the narrative fell down, the visceral reality compensated by creating such a sense of place that I could completely get into the role I was playing.

I could enjoy playing my character in this theatre of war right up to the end. Here though, the plot takes a turn for the ridiculous, which finally took me out of the experience. I almost wished that I hadn't actually played that portion of the game, which is never a good way to bring things to a conclusion.

I was surprised how much my role play itch was scratched by the war town stage it creates.

When I originally played Killzone 2, it was obviously a well made shooter, but didn't distinguish itself from the pack. Looking back on it now though, I am struck by the beauty of its industrial wastelands and the ear-splitting cacophony of battles.

With greater understanding of the unique controls and therefore how it should be played, I thoroughly enjoyed my second play through. I was surprised how much my role-play itch was scratched by the war torn stage it creates. I would urge anyone that hasn't played it yet to go and pick up a copy and sink into the role of an ISA soldier.

You can support Jon by buying Killzone2