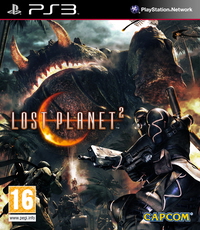 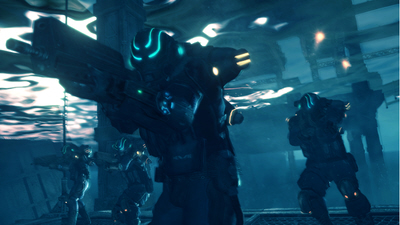 Lost Planet 2 PS3 is bigger than the first, but feels devoid of any interesting roles to play. Capcom have made a game that revisits only a few ideas from the original - the result is a sequel that needs a healthy shot of substance to flesh out its set piece battles and cooperative play.

When the original Lost Planet arrived I remember thinking as I stomped around in the snowy wastelands in my mechanised armour that the next generation had truly arrived. Lost Planet 2 is again set on the planet E.D.N. III and once again features Snow Pirates, Vital Suits, Akrid and NEVEC, but right from the beginning it's a very different game that the original.

E.D.N. III is no longer on a frozen planet, since it has been terraformed and its environments are now just as likely to be jungle or desert, adding variety whether its needed or not. I really enjoyed the blizzards of the first game, which felt fresh compared to the grey and brown environments of other shooters. Replacing these with industrial architectures that literally could have been taken from Resident Evil 5 is a genuine failure of artistic design. Fear of making Lost Planet 2 appear too similar to the original has resulted in a completely generic aesthetic.

There is almost no coherent plot, but what there is it is delivered from a number of different perspectives, which means a lot of character swapping between chapters. Often this left me confused as to whom I was and the relevance of my next objective, with only the fact that I was wearing a different outfit signaling my changed persona. Without narrative or character development, this is not a game where I could dress up or play any real role, which ultimately harmed my emotional involvement. Whilst the original Lost Planet, wasn't a storytelling masterpiece, playing as recognisable character throughout at least gave me an investment in the outcome.

Only the fact that I was wearing a different outfit signaling my changed persona.

It might not have an involving plot, but if you believe the addition of another player made Resident Evil 5 twice as much fun, surely four players double the fun quotient again? However, that is where things really go astray for Lost Planet 2. I can easily find a friend to play with, but I can only rarely sync diaries with three other people. To make Lost Planet 2 as enjoyable as it can be, this is ideally the setup that's required. In fact it's so dependent on other human players that I didn't really bother playing it on my own.

If you can't find people to play with, you are blessed with some frustratingly stupid AI to help you. There are many examples frustrating AI, but one level stands out. An extremely large weapon has four stations to man. With AI helpers, I found myself frantically running between each station whilst my squad mates stood around in seemingly suspended animation. I eventually resorted to playing this level with strangers and whist they were only slightly more help due to a lack of headsets, we eventually got the job done. Playing with friends could have resulted in all of the screaming raw drama that Capcom were trying to reach for with this battle, but without that its merely playing a video game.

This was borne out by the times that I did play with people that knew what they were doing. Only then were there times of real joy playing Lost Planet 2, where mutual playacting enabled that gaming nirvana of shared experience. Many of the bosses are screen fillingly huge and feel insurmountable on your own, but with cooperative play, they suddenly become simple puzzles to work together to conquer and rejoice over. Enjoyment is also to be had in the more mundane - spreading out to explore the level and hearing far off gunfire, signaling a friend in need. I could either aid or ignore, depending on mood or what was worth having round the next corner.

Playing with friends could have resulted in all of the screaming raw drama that Capcom were trying to reach for with this battle.

The main goodies on offer are the mechanised armour or Vital Suits, which are few and far between on early levels, but do become more numerous and powerful in later chapters. These gave me a delicious sense of power as I dished out the damage from dual Gatling guns. Some of the suits even allow you to carry passengers for even more destructive force, if you can persuade your friends to hop onboard that is.

Those moments of enjoyment feel like discrete pockets though, since the narrative does such a poor job of stitching them together. I really enjoyed playing each level, but often didn't feel compelled to keep playing. This is where it sorely misses a fully realised lead character, which would enable me to feel responsibility for driving the story forwards.

In producing Lost Planet 2, Capcom have invested much of their effort to implement four-player co-op, but in their effort to achieve this they have forgotten the other requirements for making a great game. Without these elements and with a frustrating single player experience, Lost Planet 2 lacks distinctive or compelling roles to play. It's a step backwards for the series, which I hope isn't a portent of the direction Capcom are going in the future.

You can support Jon by buying Lost Planet 2