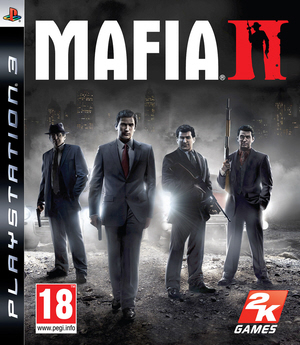 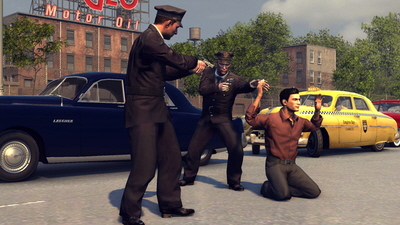 Mafia II PS3 is a beautifully constructed adventure with a mobster heart. Growing up with Vito and his friends proved that crime does pay - at least in terms of the fun that can be had dressing up as a virtual mobster.

Mafia II made me wonder if developer, 2K Czech, changed their mind about the type of game they were making mid way through development. Mafia II looks like an open world adventure, but scratch beneath sprawling city and you'll find very little to distract you other than the main storyline. There are no strip clubs, casinos, races or any of the other "time-wasting" activities that seem to be de rigueur in other sandbox experiences.

Regardless of whether they did this to maintain the focus or whether they just run out of time, I'm very happy with the finished article. That reductionism to the core of the experience allowed me to really become Vito for the duration of my visit to Empire Bay.

Mafia II then, is not an open world game but a third person action adventure set in the 1940's and 1950's in the facsimile of a period New York. You play the part of Italian immigrant, Vito, who together with his best pal Joe are young, ambitious and working hard to live the American dream - which often leads them into some sticky situations.

If I doubted that working as a mobster was a better life than that of a labourer, Mafia II cleverly demonstrates the difference. Trying to be the boy that your mother craves, you take a job moving crates down at the docks. Two options exist: actually complete the task which is deliberately monotonous and could take a significant portion of time or walk away any time you want. I'm not sure what happens if you complete the work, since it was laborious enough for me to turn my back on earning an honest wage, but it felt like a real motivation for the start of my journey into the alternative - working for the family.

That work may be played out via some cliched scenes and conversations, but unlike other mafia stories this felt fresh and historical.

By the closing chapters, not only did I have a strong sense of self preservation, but I also took careful steps to protect those nearest to me, which is a real triumph in a game like this.

The game begins in Italy during the war, before jumping forwards to 1950's America. This grants the narrative and main characters a depth that wouldn't be possible without their back story - not something that you often see in games.

Joe's presence in both good time and bad gave their friendship a sense of reality beyond that I've felt in other digital relationships. By the closing chapters, not only did I have a strong sense of self preservation, but I also took careful steps to protect those nearest to me, which is a real triumph in a game like this.

None of that good work on narrative would be worth it though if the core game mechanics weren't sound. In the main, driving and shooting have been handled very well. A decent cover mechanic, recharging health and satisfying gunplay make the many Tommy gun shootouts fun to play, but it's not an easy game. Just a few shots are enough to kill you, which very occasionally lead to some frustrating moments, partially due to the widely spaced check points, but in the main it all works well.

In one mission you walk into a warehouse and a large door swings shut, trapping you in a massively one sided encounter with no escape route. Satisfyingly, the game allowed me to create a solution for myself - by parking a car under the door I prevented it from closing, enabling me to escape the confines of the warehouse and take better cover in the docks.

Dressing up in gaming can be about forging your own character or just enjoying experiencing exciting moments through someone else's eyes.

Mafia II could have been better streamlined. At the start of missions you have to get up, get dressed, answer the phone, pick up Joe and drive to an appointment. Whilst this authenticity, which includes the need to buy gas for your car, might have been seen as immersive, it should have been play-tested out before release. I get the fact that Joe lives over the other side of town, but dressing up as Vito doesn't mean I want to every detail of his life.

Mafia II left me wanting more, and wondering what happened to Vito after the credits had rolled, which is down to how well his character and his world was constructed.

Dressing up in gaming can be about forging your own character or, as in this case, just enjoying experiencing exciting moments through someone else's eyes. In that respect, I would hold Mafia II up as one of the most enjoyable experiences that this year's releases has provided.

You can support Jon by buying Mafia II