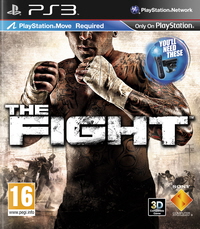 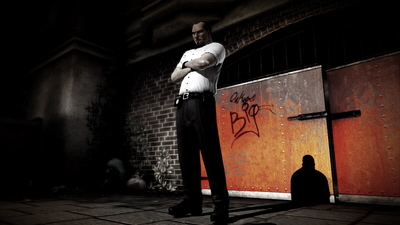 The Fight PS3 looks like a hardcore fighting game, but the PlayStation's lightweight Move motion controls ruin this brawler.

As part of Sony's desire to validate Move for the hardcore gamer we get games like The Fight, which mix the potentially exciting worlds of gritty street fighting and rap tunes with motion controls. Unfortunately though this misfires due to technology that just doesn't work.

Whilst I've always been the type to run rather than stand and fight the chance to do so without getting lumped - the bit I'm not keen on - gives me the chance to get even. Doing it with the aid of Sony's latest motion tech should provide the excitement without the fear.

The Fight places you behind the fighter with one-to-one motion controlled arms. You play through a large number of street brawls alongside a series of training modes and online multiplayer matches. There's even a gambling meta game if you are that way inclined.

The Fight deserves a warning on its box: you really need two Move controllers to play it properly. As you might expect for a game that gives you an over-the-shoulder perspective on fighting a Move controller in each hand allows the camera to track your motions.

I was just waving my left arm about hoping to convince the controller that I was swinging.

Unfortunately, with only one Move controller I had to awkwardly hold a Six Axis controller in the other hand and rely on its less-than-precise motion sensing capabilities. There was a reason why motion control didn't get wide acceptance using the existing PS3 controllers and that's because it's wildly inaccurate. It only really detects a broad sweep of your arm giving me a left hook that sometimes works, but no real jab ability.

But even using the Move controller there are problems. Compared to some of the other Move games I've tried, it appears that developer Cold Wood Interactive have really struggled to make the technology work. To begin with you have to go through a lengthy calibration process and then undertake another shorter calibration before each fight. If you then move your feet, The Fight seems to lose track of where you are. It also purports to support head tracking, but again in my living room the background was too noisy and so it disabled it.

When in the actual fights I was just waving my left arm about hoping to convince the controller that I was swinging and then doing the same with my other arm, but at least seeing some reaction with each motion. As if to concede this point I waded through tonnes of early opponents without really getting scratched, never requiring me to test the subtler abilities of the controls.

However, the urge to continue doing this to meet a tougher challenge faded before any AI character manned up. This left me with the equally unrewarding training modes or online multiplayer. Good luck with finding anyone online to play against though as there don't appear to be any virtual pugilists desperate to get pummelled.

The problems with The Fight are more than just those related to controls - the game just isn't very interesting. Every opponent looks the same, which is partly due to the almost monochrome aesthetic, but isn't helped by their complete lack of personality. None of them are introduced or enter the ring with any spectacle or any cheer of the crowd.

Even unlocking new costumes, fails to put padding round a frustrating game mechanic.

Winning fights just to unlock more fights that play the same, or even unlocking new costumes, fails to put padding round a frustrating game mechanic. This type of experience might work as a five minute mini-game, but as a full price addition to the Move library does little to help Sony.

Dressing up as a street brawler, even with its extensive wardrobe left me wanting to run away - in boredom rather than fear. The real thing might be scary, but even with my less than impressive arm flailing style, I think I could connect the odd jab with more regularity than offered here by Move.

You can support Jon by buying The Fight