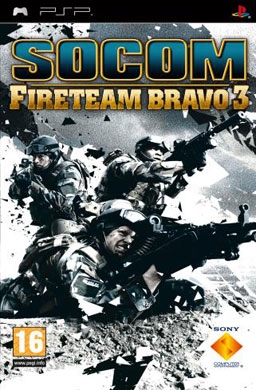 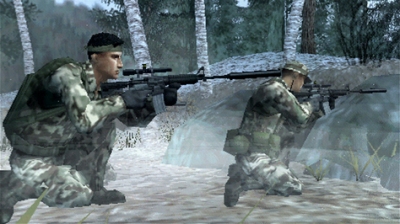 SOCOM Fireteam Bravo 3 PSP impresses technically, but sometimes struggles to deliver narratively. Although there wasn't much dressing up there was plenty of scope for getting into character and losing yourself within the role.

The original Fireteam Bravo was one of the first great action games for the PSP making good use of the limited controls. Slant Six are at the helm now and so I was interested to see whether they could bring anything new to series, hopefully improving on their SOCOM PlayStation 3 efforts.

Immediately obvious when looking at Fireteam Bravo is the leap in graphics. Scenery and character models look significantly better as does animation and frame rate. None of this makes a bad game into a good game, but played with the lights down low and a set of decent headphones; there are real moments of losing yourself in the role. And it all contributed to be favourite gaming buzz - letting myself be convinced that I was a member of a Special Forces outfit.

Whilst the spoken story enhanced my sense of involvement, the narrative itself failed to match up to the technical prowess displayed elsewhere. I shouldn't be too harsh though; the life of a US Navy SEAL probably isn't all about stopping EMC bombs and fighting the Russians on the steps of the White House - so a plus point for realism.

Even with the impressive production values, how this is put to use seems a little lacking in the early scene setting, which had they got right would have heightened the drama. You are left with absolutely no introduction to the game or why you're embarking on that first mission, which left me a little lost.

Once into the game though there are regular in-engine cut scenes reinforcing the feel of a hand-held blockbuster, with a little influence from Modern Warfare. I'm not sure whether I really want explosive drama in my tactical shooters, but you can't deny that it makes the whole experience a lot less dry and helps us role play fanatics get into character.

Although it's short it keeps the story tight, letting you experience a cohesive campaign. I prefer this approach, which gives me an adventure that I can experience as a member of the team, rather than a casual observer who is desperately trying to keep up with the next global plot twist.

As someone who plays games for these role play moments, I found a lot more satisfaction here than I had expected

The controls are still problematic. Whilst the auto aim helps, later missions require more dexterity than I had and were at times frustrating. This was most apparent with boss characters which required manual aiming and several shots from rocket propelled grenades to despatch. Quite apart from the difficulty imposed, this felt gamey in a way that the rest of the experience didn't, making these few sequences feel even more unwelcome. There is a very careful balance to be struck between immersing you into a realistic setting and giving you the game play elements that enhance the experience. In this case the experiment is a failure but thankfully wasn't a big part of my experience.

My character, codenamed Wraith, is a veteran of previous SOCOM games, but never felt more than an avatar for me to do my shooting with. The only real way to dress him up is through weapon load outs, but I'm not convinced choosing an M16 over an M4 makes a huge difference. You do get to choose stealth over all guns blazing, but there's only so long before you're going to start shooting, so I just shot first and asked my questions later.

Fireteam Bravo 3 moves this type of game forwards on the PSP from a technical standpoint and provides a strong portable experience. Whereas previous SOCOM games felt like throwbacks to an earlier age, this happily dispenses with the detail to emphasise the excitement.

This approach took me closer to the action and ultimately resulted in me greatly enjoying playing the part of a SEAL. As someone who plays games for these role play moments, I found a lot more satisfaction here than I had expected.

You can support Jon by buying SOCOM Fireteam Bravo 3