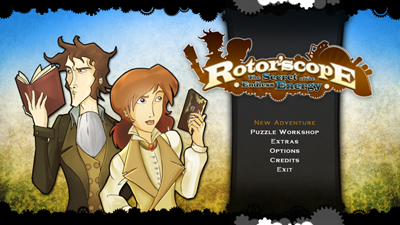 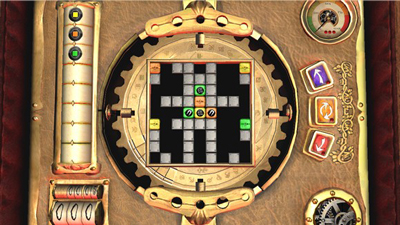 Rotor'scope converted me to the joy of console puzzle games. Even with my eclectic playing habits puzzle games on consoles have never appealed to me - the thought of sitting down on the couch playing Puzzle Quest or Hexic with a big controller just seems wrong. However, just spending a few minutes with the new Xbox Live Indie Game - Rotor'scope - has shown me that the big screen can still compete with the likes of Professor Layton on a portable system.

I loved its gloriously over-stylised Victorian characters. The presentation of Rotor'scope really helped to introduce the puzzles. I often find the story in many puzzle games fairly trite. But here the comic-strip style cut scenes were interesting and easy to follow even if the dialogue was a little questionable.

You begin by exploring the house of a missing inventor and meet up with a fellow investigator, oddly called Traveller, and start looking for clues to his whereabouts. Every clue or action of the game results in using the titular Rotor'scope to open doors, activate gramophones or unlock safes.

I felt the game had a great sense of character, even down to the mechanical gears and cogs of the Rotor'scope itself as each puzzle gets revealed

I felt the game had a great sense of character, even down to the mechanical gears and cogs of the Rotor'scope itself as each puzzle gets revealed and the look of the over world map where you move from room to room. The puzzles themselves start out easily enough and utilise the same match-three mechanics that so many other puzzle games have used in the past.

But Roto'Scope takes this match-three game and makes it much more challenging. You only having a few blocks in its puzzles and the ability to rotate or flip the puzzle board itself. Gravity moves the blocks and although I thought this limited the game's potential to begin with, it soon offered variants of these puzzles and elevated the game play to a level I wasn't expecting.

I was really pleased to see the difficultly curve was nice and slow - I'm not the most agile of gamers. It gave me time to adjust to Rotor'scope's unique puzzle layout and how shifting the board clockwise and counter-clockwise worked when trying to match up the different blocks. This was especially needed after the introduction of power blocks which, when used correctly, vaporise a line of dark blocks. There were a number of occasions when this type of puzzle completely stumped me, but as you unlock several challenges at the same time it wasn't hard to try something else and come back to other puzzles later.

Though you can undo a single move if you make a false step I felt it would have been nice if the game had a more intervention-style hint system where it suggested my next move. I say this because you can manoeuvre the board and the blocks in such a way that the puzzle becomes impossible to solve.

This was a new experience for me to have puzzles that became broken if I took the wrong approach. It was a sharp reminder that the difficult level in this game really does get fiendish hard the further you go. It's also a much longer game than I expected and the introduction of the new elements helps to keep things more interesting.

The most unexpected feature of Rotor'scope is the Facebook integration which gives it the kind of leader board content and friend competition that I love in my puzzle games.

The most unexpected feature of Rotor'scope is the Facebook integration which gives it the kind of leader board content and friend competition that I love in my puzzle games. Uploading my score and time for each puzzle was an element of the game that really added some competitive spice to the experience. The integration works so well because the individual puzzles on the map are coloured-coded according to how well you do. Silver means that someone else has a better score and gold means that you've got the highest score. You also get points for doing this which then unlocks further content within the game. I was thrilled to see so much content in an Xbox Live Indie Game and the ability to issue challenges to your Facebook friends more than makes up for any multiplayer shortcomings.

Even with my wide-ranging play history I realised this is the first time I've tried the Xbox Live Indie Games section and I'm amazed with the quality. It seemed more like a proper Xbox Live Arcade game. As a puzzle game fan I found it a nice mix of challenges that kept me going for hours. I hope this is just the first in a long line of Rotor'scope puzzle games and I can't wait to see what's next.

You can support Clare by buying Rotor'scope