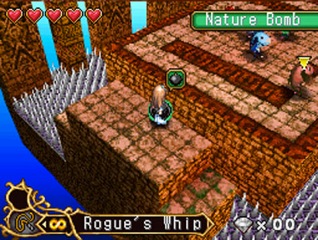 Steal Princess DS surprises with an unusual blend of 3D puzzle-rooms and a bizarre mix of characters. It reminded me other titles from my eclectic past like Head Over Heals and Knight Lore on the Spectrum. Only the awkward isometric control system on the DS and the repetitive nature of the levels kept me from really falling in love with this intuiging and unique puzzle game.

Puzzle games can crop up in the most unlikely of places. Steal Princess for the Nintendo DS is one such title that I had dismissed initially for being an action/adventure oddity lent to me by my friend. A game more suited to those RPG veterans who were looking for something a little quirkier than normal.

Reluctantly I slotted the cartridge into my DS and after an hour of play I slowly began to realise that this was a completely different type of game to what I was expecting. Steal Princess has all the bizarre trimmings of a Japanese developed title with its cutesy characters and slightly over-Americanised translation, but behind all of this the gameplay of the actual levels piqued my puzzle brain immensely.

These 'rooms' do little to push the narrative of the game along but they are each a 3D puzzle of their own and made each level an exciting new challenge for me to complete.

Once I got past an unnecessary amount of plot exposition at the beginning of the game, the tutorials guided me through the early levels and gave me a grounding in the basic game mechanics. These 'rooms' do little to push the narrative of the game along but they are each a 3D puzzle of their own and made each level an exciting new challenge for me to complete.

These levels are displayed in an isometric format and gave me bit of a flashback to older games like The Adventures of Lolo where the premise of finding the key in order to open the door to the next room is always the challenge. While the visuals reminded me of the past I found Steal Princess giving me more than just a charming retro vibe and the way these rooms had been constructed always taxed my grey matter.

I found that some of my weapons could be imbued with certain elements like fire or water for instance. Once charged with this power I was able to slay some of the enemies that shared the same elemental attribute as my sword - a vital task when the level required me to dispatch monsters in a certain order. Another trick the puzzle rooms try on you is to limit your weapons and give you a seemingly impossible number of enemies to deal with. In this instance the solution really started to get to me. I was having such a bad time trying to figure it all out that I was sure the game had a critical bug or was just broken on this particular level.

The mix with RPGs continues later on in the game and I was surprised (and scared) to see boss fights pop up against minor demons.

Of course this wasn't the case and the solution was obvious in the end - I just lined up the enemies so the single lance I had could pass through them all - fiendishly simple, just like all good puzzles should be. Even before I reached the eight-hour mark these levels were really getting difficult; going from a simple hack and slash solution, to using the whip to swing off enemies while avoiding spike traps and throwing bombs - all within a tight time frame and without making any control errors.

The mix with RPGs continues later on in the game and I was surprised (and scared) to see boss fights pop up against minor demons. Boss fights are the main reason why I don't play many shooters or RPGs for longer than a few hours, as I find these taxing encounters just too difficult and not enough fun. Steal Princess falls somewhere short of my fears but still does enough arbitrary stuff to make me consider stopping the game.

The first encounter wasn't too complicated but even though it just involved using the whip to get myself onto a circular platform and then attack the enemy, it felt more tactics-based than puzzle-based for my liking. And it's here that the game starts to lose its way with me. The more difficult the levels get, the more fraught they become and the more the puzzles turn to tactical challenges against the enemies in the room. I like the slower paced levels and although the latter half of the game still has a decent variety of puzzles, it never felt quite puzzly enough.

Although I found a number of flaws with the controls and difficulty level, it's hard not to succumb to the Steal Princess's overall charms.

The other issue that stopped me from enjoying the game as much as I wanted to was the controls. I'm happy to admit that this might be down to personal preference rather than any general flaw, but moving a character in an isometric world can be difficult at times. For games where precision doesn't matter then this wouldn't be a problem but Steal Princess requires accurate movement and the combat has to be perfect when life and death are in the balance. Sometimes I would leap forward when I didn't mean to and other times I would cycle through items when I wanted to select the sword and throw it on the ground rather than attack an enemy.

I still loved how barmy the narrative and story is though. It's an interesting tale about a reluctant hero called Anise who's actually a thief - hence the reason why you collect gems throughout the levels - and her quest to rescue a Prince. It's a nice flip of the usual damsel in distress tale and the dialogue between her and the semi-irritating helper Kukri made me chuckle at several points.

Like I mentioned, it was the puzzle rooms that most connected to my varied play history. I was, at times, transported back to a simpler world of dual-tone bitmap graphics and game companies like Ocean and Ultimate. Although I found a number of flaws with the controls and difficulty level, it's hard not to succumb to the Steal Princess's overall charms. The traditional isometric view can be awkward at times but I found it many parts of the game endearing and its range of puzzle rooms still has me coming back now to tinker with them.

You can support Clare by buying Steal Princess