As a huge fan of the Animal Crossing games I could hardly contain my excitement when I got the 'Let's go to the City' game, bundled with Wii Speak. I couldn't wait to get writing about how the new game works out. I'll be blogging my way through the experience right here on this page - so you can enjoy it too.

As an aside, I'm not entirely sure why the game had to be re-titled for the European market as it's just made it a bit of a mouthful, very difficult to abbreviate and talk about - City Folk just rolls off the tongue far more easily and as it was the name that I'd heard about pre-release, it's what I find myself referring to the game as, so forgive me for that please!

Nostalgia kicked in straight away as I started the game, there was Rover welcoming me just as in the original Gamecube version. No matter if you didn't play the other games, this version introduces you to all aspects as you play it, and if you did play the previous two games then you spend the first fifteen minutes of play noticing tiny differences and re-acquainting yourself with favourite characters. 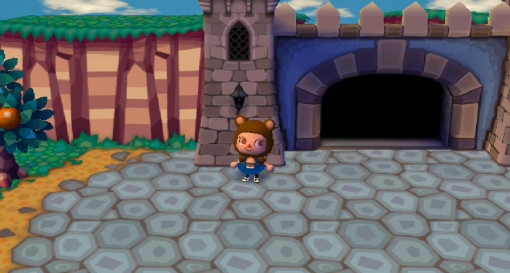 Nostalgia kicked in straight away as I started the game, there was Rover welcoming me just as in the original Gamecube version.

I hit a technical hitch almost straight away, however, and not one that I was expecting. One of the options in the game is to import your Wild World character into the City Folk version, and this is what I was planning to do. I spent 18 months of my life working hard to almost complete the catalogue in the old game, so if I could save myself some time collecting furniture in this game then it was worth doing! But, when I tried following instructions to move my character across, both the Wii and the DS informed me that I had the wrong game cartridge.

Of course I couldn't wait to solve the problem, although I had an idea of what might be wrong, so I went ahead and created my town and a brand new character. As I began to play, I found the controls very intuitive and easy to pick up. The graphics look incredibly like Animal Crossing Gamecube, although a bit smoother and cleaner. But the town layout itself takes you right back to the original game, with its different ground levels.

The gameplay is very very similar to the old games, but I think there will be enough differences to keep my interest up, I'm already completely hooked, and smiling at subtle changes that bring the game right up to date, while enjoying every minute of the familiarity after knowing some of these characters and the game for years now!

I'm already completely hooked, and smiling at subtle changes that bring the game right up to date.

I played for long enough to finish my initial chores for that rich raccoon, and then stopped to think through my earlier problem. The only thing I could think was that this was a region specific clash, as my DS cartridge is a USA game, while my Wii and the Wii game are European. To test this theory I invited a friend and their DS game round, and went through the rigmarole of moving my character first into their town, and then tried again to get it into the Wii game. Thankfully it worked and I copied the character over. I must admit that I was surprised about this - I knew that the Wii was region locked but somehow I hadn't anticipated that particular difficulty. Still, it will affect a minority of people and I suspect that most of those who will be affected would probably be able to find a friend to help them out as I did.

So, my old friend Daisy finally made it into Oakwood, my brand new City Folk town. She managed to take her catalogue of items and clothing with her, but had to leave behind her fossil collection, gyroid collection, and worst of all, her money! She then had to work her way through Nook's chores - mildly annoying, given that I really didn't need to learn all of these skills, but there we go. After that it was down to the hard graft of earning some money to pay off the first mortgage. I managed to pay off the first loan simply by fishing and catching bugs, picking up shells and shaking cherries from my trees.

Of course I had to take a trip to the City, the main new feature in the game. Kapp'n drives the bus from your town to the City, where you can explore a whole range of shops, some familiar and others brand new. In a quick sweep of the mall, the highlights seemed to me to be the Auction house, where items can be left for other players to purchase, GracieGrace's high end boutique, the Happy Room Academy headquarters, and Dr Shrunk's marquee, as well as a shoe cleaner and good old Crazy Redd himself. I didn't have enough bells to try everything but I loved the concept of 'going to the city', and I think I will be spending a fair bit more time there!

It's not a very British thing, really, to have a microphone on in your living room

As with Animal Crossing:Wild World, one of the main features of the game is online play, and for this you and your friends have to have registered one another's friend codes before you can travel to each other's towns. Thankfully there are plenty of forums online where you can easily exchange details with people and see who you meet that way. Within a short space of time I'd managed to exchange a code with someone and opened my town gates for a first visit. It wasn't quite the same thrill as the first time I did this on the DS game, where it was a totally new experience to connect via Nintendo WFC, but still pretty exciting to see the notification 'someone's arriving' flash across the screen!

There was the added question at first: do you have Wii Speak? We both did, and tried using it, but as I suspected it was fairly glitchy and I couldn't really hear what my friend was saying - to be honest I hope she couldn't hear what I was saying either as I was more talking to my husband in the same room as me than to her! I didn't try very hard to get it working any better as it felt a bit weird - it's not a very British thing, really, to have a microphone on in your living room, it goes completely against our culture I think! So I imagine I will stick to the text based chat, although I'd like to try plugging a usb keyboard into the Wii for this, as the onscreen writing is fairly laborious. I would be more inclined to use the microphone with a friend I already know than with a complete stranger, it just seems a bit strange to me otherwise.

I'll be back soon with my next blog update.

Anyway, my new friend and I pottered around chatting a bit about our previous Animal Crossing: Wild World DS experiences, and what we thought of this game, and then we both popped back to her town. Unfortunately we both have the same native fruit so couldn't make an exchange there but hopefully I will soon find more friends to add to the list. I really enjoyed the visits, more than I thought I would. I noticed little things like the triangles on her ground pattern (I have circles on mine) and loved chatting with the animals in her town - some of the conversations you have with villagers are really surreal and very funny.

My initial foray into the game leaves me completely wanting more, as I've only skimmed the surface of the game in the first few of hours of playing. There is definitely enough new things in the game for me to keep playing. I'll be back soon with my next blog update, and thereafter each week (ed: we'll keep adding these to the review).

You can support Clare by buying Animal Crossing 01: Meet Daisy and Oakwood