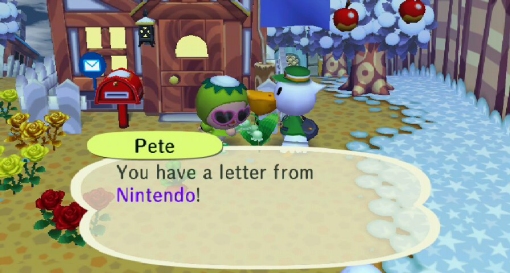 Daisy's had a fairly exciting week, in addition to the usual chores around the town! On Monday there was a special event on Groundhog Day in North America, so I hooked up with a US friend to visit their town. Daisy tiptoed around that town, as it was carefully laid out with paths and flowers to maximise grass growth, so no running allowed!

A quick chat with Tortimer and I was the proud owner of a special Resetti Model, only available in US games on this day, which is now displayed along with the other models in my house. Again, an item that I wouldn't have been able to acquire without the wifi element of the game! While I was there I spotted another couple of items that I needed and asked my friend if she could order them from Nooks for me. I then spent the next couple of days awaiting mail from her with the gifts inside - who knew that mail could be so exciting!

I've been fishing a fair bit this week, and I've managed to catch two of the three fish that were still outstanding - a tuna, and the living fossil, the coelacanth, which only appears when it is snowing or raining, so you don't see it very often! I donated both of these to Blathers in the museum; he seems pleased that the collection is coming on well! I still need a stringfish, which I haven't even spotted yet, so fishing will be high on the priority list for the rest of the month, as the stringfish disappears at the end of February!

When I turned on the game, Pete the postman was standing right outside my house.

Most exciting of all was Friday. When I turned on the game, Pete the postman was standing right outside my house. Sometimes you see Pete wandering around making deliveries, but only at 9am or 5pm, and it was around lunchtime, so it was very unusual. He wouldn't let me out of the house without giving me a special delivery letter from Nintendo! The letter was from Captain Olimar, and contained a special gift, the Red Pikmin hat!! I was ecstatic to get this, and immediately went to the Able sisters to make myself a matching dress!

When the game was released there were rumours of Nintendo's downloadable content (DLC), and I had wondered how it would be distributed, so now I know! In order to make sure you can access this, you just need to make sure that you have set up your Nintendo WFC settings and have Wii Connect 24 turned on.