If I had to describe this week in Animal Crossing it would be 'just a bit cheesed off'. The week started with the excitement of 'Festivale', a special event in which a dancing peacock whipped the villagers up into a frenzy. They were playing silly games all day and giving out candy to the winners - and once you'd finally earned three candies of the right colour for your efforts at these luck based games, you could exchange them with Pave (the peacock) for exclusive furniture items.

Yet again, when playing alone, this turned into the most tedious, mind-numbing activity. Half the time I wasn't even looking at which responses I was making, just clicking through the options to get another game over and done with. Pave would, of course, start giving out duplicate items rather than the ones you needed, as well.

However when the games and candy collecting was shared out with wifi friends it became a lot more fun, thank goodness, and I enjoyed playing with a friend for a while. Having said that, it still took almost four hours of play in total to earn all the items available, so I was glad when it was over - and I'm sure that's not really how I should feel after a special event. 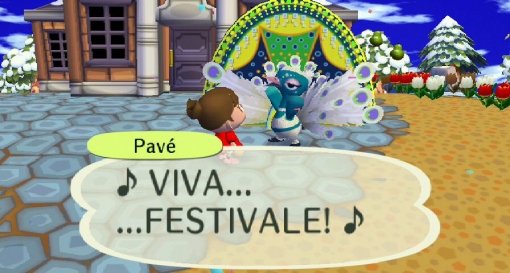 A special event in which a dancing peacock whipped the villagers up into a frenzy.

The Stalk Market in my own town was fairly abysmal, with turnip prices on a steady decline all week. I thought I would have to sell at a huge loss but then a wifi friend came through and I was able to make another million bells or so, after giving some away here and there!

The seasons are on the change, and over the past fortnight the trees have turned green, then this week the snow disappeared. Unfortunately I felt that this really did make my town look ugly; the dynamic path feature seemed good at first but with a lot of running around in the town, the majority of the grass has been worn away. I'm feeling a bit disappointed about this, as are a lot of players that I know, because you can't really play the game properly if you have to be constantly taking care not to run or even walk over certain areas.

So, I spent an hour or so laying down patterns as paths in my town, in an effort to keep to the same tracks and hope that the grass will grow back in the other areas. I have read that it can take a very long time though ... and I will have to sacrifice the ongoing money making through fruit harvesting as a result, as it is impossible to do that and stay on the paths. Even looking for fossils to dig up will be tricky. Only time will tell whether it will be worth the effort and sacrifice.

Still, Spring is on the way, and with the beginning of a new month and season comes new bugs and fish to catch, so that will add some interest back into the game for me I hope, despite the curtailment of my running around!

You can support Clare by buying Animal Crossing 12: Dancing Peacocks