Animal Crossing 13: The Spirit of the Lamp

Weeks are beginning to run into one another in Oakwood these days. Just more turnip price watching, axe throwing, and flower watering! Thankfully I'm getting better at remembering to take in-game photos so that at least reminds me about important events.

I've been desperately trying to stick to walking on the paths that I laid down, but it is tricky, I'm constantly walking on the flowers by accident. And the grass seems really slow to grow back, I'm sure the grass in my real life garden grows faster!

Early in the week I discovered a wailing kitten in Oakwood. She had been separated from her mum and couldn't find her way back! This is a feature that was introduced to Animal Crossing in Wild World and has stayed fairly much unchanged in City Folk; after wifi sessions you might find either the kitten (Katie) or the mother cat (Kaitlin) in your town, and you have to try to re-unite them. Luckily I was in contact with the other player and despite a time lag where the mother cat was waiting in the other town for a few days before Katie turned up in my town, we managed to get them back together eventually. Katie sent me an exclusive gift to say thank you, so that was nice. Another item that wouldn't have been found if not for online play. 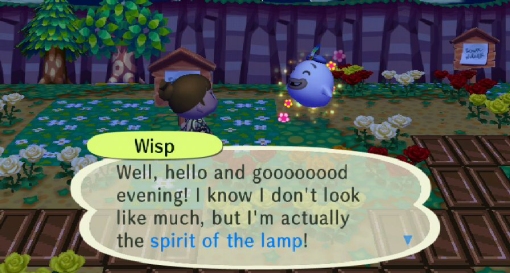 I've been drinking a lot of coffee from Brewster in the Roost, and even meeting townies and other characters in the coffee shop too! After seven days' coffee drinking, one day when I had a gyroid in my pockets, Brewster chatted to me about his passion for gyroid collecting, and has offered me a space to store my gyroids too, so that will be really useful!

I knew this meant that Wisp would be visiting after 8pm, so late at night I fired up the game again to try and find him.

An online friend got in touch and let me know about a special event in her Japanese town, so I visited there one day and picked up a Rice Cake from Tortimer on Girls' Day. Not a terribly exciting event but after Festivale, I appreciated the simplicity of just collecting an exclusive item rather than having to work for hours to collect a whole series of furniture!

Finally, one day towards the end of the week I spotted a golden lamp lying around in my town. I knew this meant that Wisp would be visiting after 8pm, so late at night I fired up the game again to try and find him. Luckily I bumped into him without having to wander too far from the path, and he whispered to let me know where to find him. For finding his lamp he gave me a wish - I opted to receive an item still missing from my catalogue.

Oh, and one last thing - after selling turnips this week I made it to 10 million bells in the bank - the piggy bank gift is mine! Only another 90 million to go until the next prize.

You can support Clare by buying Animal Crossing 13: The Spirit of the Lamp