Animal Crossing 16: It's been a LONG while

It's been a busy few months in our household. I wasn't really intending to stop playing City Folk but after a week's holiday away from home, somehow life got the better of me and I couldn't bring myself to play catchup, setting the clock back to play each day since I last played - so I just didn't play at all.

The longer I carried on not playing, of course, the longer the catch up period! Eventually I resigned myself to giving up completely. However, the lure of summer in Oakwood became too much, and so, during my summer break, I decided to play the game again.

It's been around three months since I last went into Oakwood, and I decided just to open up the game where it was and take the consequences. The town was fairly full of weeds, but it didn't take too much time to pull those up. I watered the few flowers that were left - that's my main disappointment really - Oakwood really was full of flowers, and now there are only a handful left around the town. Since I hadn't planned to stop playing, I didn't put my hybrids in my house where they would have been safe, so they're all lost as well. What a shame! Still, it shouldn't be too long before some spring up again. 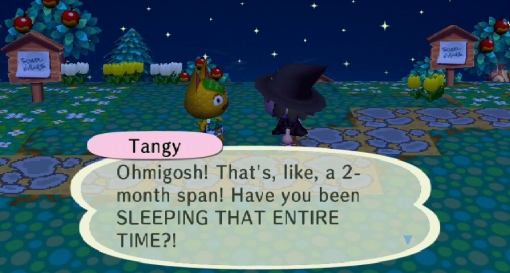 During the summer I think the insects are what dominate life in town.

My townies had missed me, and I had a few conversations with various animals where I had to think up excuses for where I'd been!

The soundtrack to summer in Animal Crossing is that of the cicadas calling, and I confess that I'd missed it! I ran (okay, I walked - save that grass!) around town finding all the new bugs that I could and donating one of each to Blathers for the Museum's collection. During the summer I think the insects are what dominate life in town - from the friendly Bug Off contests each month to the inevitable bites from the scarier bugs that only appear at night! There are new fish as well, including sharks, so I will have to look out for those.

I had to chase the cockroaches out of my house because I hadn't 'lived' in it for so long, I hate those things! Luckily there were none in my bedroom!

I especially loved the Witch's shirt and hat, which not only looks hot with my current 'bed hair' look...

I also paid a quick visit to the city to see the new range at Gracie Grace, and couldn't resist snapping it all up! Luckily I still had plenty of money in my bank account so I just took that golden shopping card with me and Labelle ran round bringing me everything I asked for. I especially loved the Witch's shirt and hat, which not only looks hot with my current 'bed hair' look (that's what happens when you stay in bed for too long!) will come in handy when Halloween comes around I'm sure! I took the 'Sweets' range of furniture home and exchanged my outdated Easter Egg furniture for that.

It's actually been pretty exciting to come back into the game after such a long break and have plenty to do - it didn't feel like the daily grind of old, it felt more like a rediscovery of the fun you can have in this game. However, I have plans in store for the town, so I am going to try and play a little bit more often again, which should be fun.

You can support Clare by buying Animal Crossing 16: It's been a LONG while