The end of August has come around all too quickly. We had a week away from home but apart from that I've been spending some time in Oakwood most days. However, I've resorted to a much more 'laissez faire' attitude to the game - not time travelling at all, not worrying about the Stalk Market too much, unless I think I'll have time in that particular week.

The summer is by far and away my favourite season in the game; the grass is bright green, the sun shines (not like real life!), and there is lots to do. Every Sunday night during August in Animal Crossing: City Folk, our towns were treated to firework displays that went on for hours and hours! These were really pretty, as long as you didn't stay in town too long, as after a while the noise of the bangs and the excited 'firework' music began to get a bit annoying! Anyway, it was nice to see Tortimer on a regular basis.

One of the things I enjoyed doing recently was going to the City for a visit to Shampoodle - I wanted to get rid of the bed hair that I'd acquired after my long spell away from the game. Harriet gave me lots of options and after I'd answered a few questions, she gave me a lovely cut and colour! Afterwards she told me that I was "oozing style", then again, as the stylist I suspect she is somewhat biased! Anyway, it felt better to have a proper hairdo again. 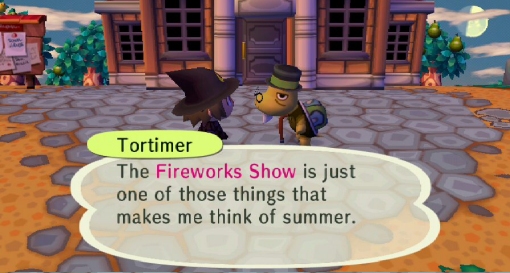 Any of the bugs only appear after 11pm so I stayed up late at night a few times to snag those!

My main aim during the past couple of weeks has been to try and find all the bugs and fish that I needed to catch, as after a break from the game I was fairly behind on this. Also, there are a number of rare insects and fish over the summer months, so you have to get lucky in order to find them.

After a while, I realised that unless I played a lot more, I was never going to find some of them. Many of the bugs only appear after 11pm so I stayed up late at night a few times to snag those! A couple of them, the rare tarantula and the scorpion, can also give you a vicious bite which knocks you out - very scary the first time it happens, as for a split second you think your game has crashed or something - the screen goes all black and then you recover, outside your house as if your game had restarted! Thankfully there is no lasting damage. 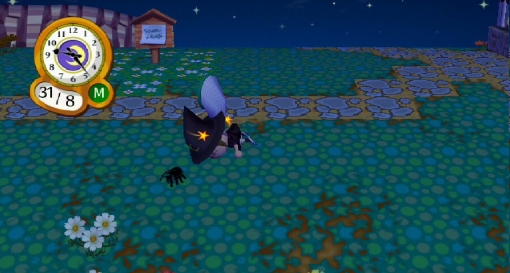 Despite knowing that these bugs do appear, I hardly saw them, and when I did, I just got bitten. After I'd caught the more common insects, I began to wonder if I'd manage to catch the full complement. I read on another Animal Crossing: City Folk blog that someone had cleared their town of trees and flowers, in order to force the rarer bugs to appear. The game can't generate the insects that sit on trees or fly near flowers if there aren't any, therefore it spawns the scurrying insects instead and rather a lot of moths (but the less said about them, the better). "Bleh", as Blathers would say!

This approach made total sense to me, so I set about clearing the trees in my town. I didn't have many flowers anyway, since my long break in play. Sure enough, I spotted a lot more scorpions and tarantulas after that - but time was running short. Sadly, I got to the end of August without managing to capture a tarantula at all. The scorpion remains available in the game during September so I'm still hoping to catch one of those.

The same fervour was applied to fishing over the past couple of weeks.

The same fervour was applied to fishing over the past couple of weeks; there were a lot of summer fish to catch. Unfortunately there is no way of forcing the game to spawn particular fish! Eventually I caught the sharks and all but one of the rare fish for August.

I've let the game roll on into September, and I'm not too worried about the missing summer catch. They may have to wait until next summer, or perhaps I'll set the game back a few months after I've completed a year's play. It was quite cathartic to have chopped all the trees down, and I've enjoyed laying down a few more paths. Once I've caught the missing insects I'll re-landscape the town, which will be fun. In the meantime I'm trying to stick to the paths, as I'm aware that now it is September, the grass will be growing more slowly, so I need to watch where I'm walking!

You can support Clare by buying Animal Crossing 17: Chasing Tarantulas