It's been an extremely exciting week in the town of Oakwood and there is loads to report!

First of all at the beginning of the week Tom Nook decided to upgrade his shop. This was a bit of a relief, as Nook's Cranny doesn't sell an axe or a slingshot, both rather essential gameplay tools. The only small annoyance was the fact that Nook had to close his shop for a day to refurbish it, but I guess it is a small price to pay for the bigger, better, and longer opening hours store that is Nook'n'Go!

Thankfully, the same day that Nook was closed was also the flea market event in my town. This is a regular event where you can visit your neighbours' houses and buy their stuff (well, the things they want to sell you) at knock down prices! Also, they will visit your house and buy your things at vastly inflated prices, so it's worth stocking up on fish and bugs to sell - I made some good bells this way. 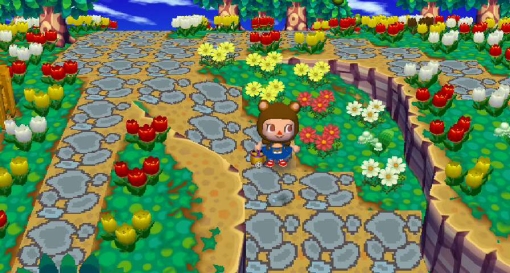 It will take a while to pay for that, as the loan for it is huge!

Joan, the turnip seller, visited on Sunday, and I made sure I spent as much money as possible on turnips. The Stalk Market is by far the best way to make easy bells in this game, although this week I didn't get great returns, it was a profit at least. I used the bells to donate to the town fund (more on that another time) and to pay off Money Supermarket. Nook has helpfully built me a basement, but it will take a while to pay for that, as the loan for it is huge!

Towards the beginning of the week I was working hard on my town's status, as there are good rewards for having that 'perfect' town. This means having the correct number of trees and/or flowers in each acre of the town - and therefore requires a fair bit of mapping and counting in order to achieve it. I was thrilled when Pelly at the Town Hall finally told me that Oakwood was a great place to live. Now I just have to keep it that way for a fortnight to get the prize!

The City really started bustling. I didn't spend that much time there, but I did finally get an invitation to visit Crazy Redd's Store. Once there I decided to pay the membership fee and join, as he wouldn't let me buy anything otherwise! I bought a painting, hoping that it wasn't a forgery! Thankfully when I got it home and took it to my museum it was fine and Blathers, the museum curator, is proudly displaying it in the art gallery there.

On Thursday, coinciding with the US Thanksgiving Day, there was a Harvest Festival in town.

On Thursday, coinciding with the US Thanksgiving Day, there was a Harvest Festival in town. This was a fabulous event with comedy value no end as you had to collect a knife and fork from the mayor, and then play hide and seek with a visiting turkey! I played in my town, and then my time ran out but I still needed some of the special items only available on this day - so I went hunting for wifi friends.

One of the best improvements I have seen in the game so far is that special events are still playable over WiFi. These used to just disappear in Animal Crossing: Wild World DS, if you opened gates then the event would stop - but now you can play festivals with friends, which is great. I had a ball running round someone else's town looking for the turkey! There were three people playing at the time and it was much more fun to be able to shout out 'Found him!' and tell everyone where to come to have a chat and get that special item of furniture - then swap it if it wasn't the one you needed!

And now it's the end of the week, and almost the end of the month, so I am madly trying to catch all the fish and insects that won't be available again for a while. I probably won't manage it as I don't seem to be able to play much during daylight hours, but I'm going to have fun trying!

You can support Clare by buying Animal Crossing 03: Perfect Town