It's been a quiet week in Oakwood, mainly because I've had a bad cold so have been heading to bed early every day rather than staying up on WiFi! This is where I would say the DS game wins over the big console - if it had been AC:WW I would still have played in bed! My husband says that he prefers AC:CF for this reason though, as I have to leave it downstairs!

Still, despite a week with less play than before, there have been some notable events in the town. First of all, a new bridge was built! In this game you have to give donations to your town fund, and the first few of these actually add features to the town. All the town's residents could choose between a couple of places that it could be built. It took them a week to build it but it's great! After my next sizable donation I should be getting a fountain which has a special function as well as being pretty, so I am looking forward to that, too. 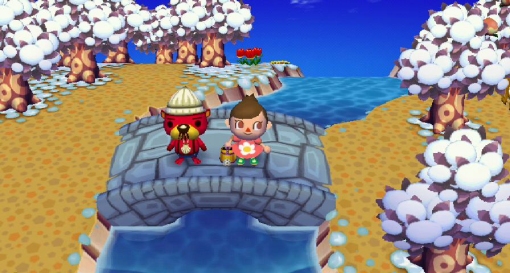 I was really excited to see my first hybrid flowers appearing this week.

The town is still perfect, but I still need to wait a few more days for my golden watering can. In the meantime, though, I received the silver can in the post, from the seed company! When you have bought 50 packets of seeds from Tom Nook they send you the silver watering can as a reward. It's nice and shiny and seems to do a better job of watering flowers!

On the topic of flowers, I was really excited to see my first hybrid flowers appearing this week. Certain colours of flowers, when planted in combination, will spawn other colours - my red and white cosmos produced a pink one, and I also have an orange rose from red and yellow roses together.

The game celebrates 'Naughty or Nice Day', with an exclusive European special gift from the mayor

I'm happy to say that I'm feeling better at the end of the week, so back on WiFi again, which really is the best bit of the game. My only criticism is that my friend roster isn't big enough to add everyone that I would like to have on it.

European players will find themselves particularly popular on WiFi today, as the game celebrates 'Naughty or Nice Day', with an exclusive European special gift from the mayor - American players will need to visit a European town if they want to get it! The date is set to co-incide with St. Nicholas' Day, and your bulletin board says to leave a shoe or even a sock outside your door. As the only place to get a shoe in the game is to fish some rubbish out of the river I confess I didn't actually do this, so I hope it's not really necessary and that I will get a present anyway!!

You can support Clare by buying Animal Crossing 04: A new bridge