Oakwood is enjoying a post Christmas slump. Nothing amazingly exciting has happened in town, but I'm still playing every day just to do the essential and enjoyable chores each day.

Each day has seen a couple of additions to my catalogue of items, either from Nook's shop or the Able Sisters. And I'm madly saving bells in order to be able to buy Gracie Grace's extortionately expensive furniture series in the city, but I'm not quite there yet. I only made a small profit on turnips this week.

One achievement this week was that I managed to shoot down a golden slingshot. At certain times in the day, presents attached to balloons float across your screen, and if you manage to pop the balloon using your slingshot, then you get whatever is in the present when it drops to the ground. The golden slingshot is pretty useful as it shoots three shots at a time, giving you a much greater range for shooting! The special Mario series of items can be obtained this way but I only have three of them so far, so I need to look out for a few more balloons soon. 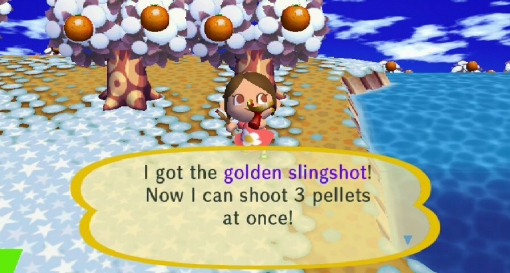 I'm still waiting for the golden axe from my fountain goddess.

I'm still waiting for the golden axe from my fountain goddess, she is being very slow to hand out her gifts. I don't think she likes me very much.

I've done quite well catching insects this week; I managed to bag a dung beetle (caught rolling my snowballs away), a bee that was trying to attack me, and some ants which were crawling over some rotten turnips. I'm not having quite as much luck with fish though, I have some of this season's catch still outstanding so I will need to be fishing like crazy in the next couple of weeks.

I moved the Wii to another room so that I could play Animal Crossing while using my cross trainer at the same time.

Now, confession time. I'm finding I have to adjust the clock so that I can play the time of day in town at the time of day that it suits me in real life, and these simply don't match up. It's not quite time travel, I keep telling myself, just small changes here and there.

It is the New Year and the season for resolutions ... so in real life I moved the Wii to another room so that I could play Animal Crossing while using my cross trainer at the same time. Conjures up a funny picture, I know - and I'm glad that there's no web cam attached to the game! For the most part it works quite well, although I do have to stop running every now and again for the bits where you need to point the Wii-mote at the screen!

You can support Clare by buying Animal Crossing 07: 2009 begins