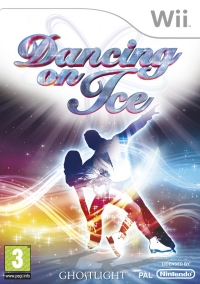 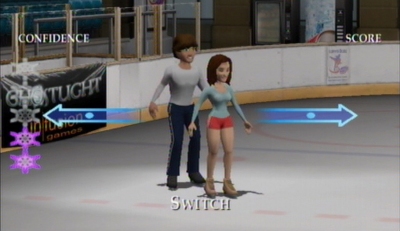 Dancing on Ice Wii took me from a love of Figure Skating to appreciate Ice Dancing. Something about it hooked my competitive nature and no matter how imaginary the challenge, this was a game I had to win.

I love watching Figure Skating. The fancy costumes and flowing moves entrance me. But for some reason I have never been interested in watching Dancing on Ice. The game, is very different from the show though. I was skeptical at first, but soon got into creating my very own ice dancing character. I know, simple things for simple minds.

I found out the hard way that you really need to use the tutorials, preferably before you start the Show. Typically, I decided I didn't need to bother with all that and was soon struggling.

Once you've created your skater, you become one half of a skating pair and dive into the Dancing on Ice practice routines. Once you have it nailed you perform to the judges and are scored on you performance. There's then a silly phone dialling minigame that I'd have preferred to skip.

Dancing on Ice is like some kind of strange workout, but only for one side of your body. I spent a lot of time looking like I was stirring am imaginary cauldron with my Wii-mote, and flailing around in random directions. I really started to feel my little muscles ache if I played for more than an hour.

Bigger movements seem to register better, so I spent a lot of time gesturing somewhat extravagantly, trying to get a higher score. This provided great amusement for next door's builders when they spotted me leaping around my living-room, thrusting my arms into the air and pointing at nothing.

Dancing on Ice is like some kind of strange workout, but only for one side of your body.

For all the stupidity though I enjoyed it. It brought back memories of playing on the PS2's EyeToy. I absolutely adored the games that involved waving your arms around to hit certain on-screen areas . As the Dancing on Ice routines became more complicated I felt as if I'd been sucked back in time to experience the craziness of the EyeToy in some alternative universe.

Surprisingly, you really have to concentrate if you want the judges to give you good marks. I know I'm a competitive person, but Dancing on Ice really brought that out of me. In training I found myself putting a lot of effort into learning all the moves the best I could in the time. Some were pretty easy, but as the game progressed you had to perform everything faster, and more difficult routines with less breaks were introduced.

In fact, if you used two remotes to play both skaters at once (you'd have to be super-coordinated for this) you would end up looking like some half-crazed, ice-dancing ninja with your arms flying about all over the place. Maybe I should try that sometime, it could really add to my workouts.

I'm sitting on my living-room floor hoping my imaginary skating routine with my imaginary partner impressed the virtual judges.

Dancing on Ice is well pitched. The gradual build-up gave me a real sense of achievement each time I survived the voting. I know they would never actually get rid of me, but still. I surprised myself by really wanting the judges to like me the closer it got to the final performances. I mean, seriously, I'm sitting on my living-room floor hoping my imaginary skating routine with my imaginary partner impressed the virtual judges. Get a grip, girl.

This, although a little worrying, is a good sign to me. If I can get this involved in a game, especially one I didn't know if I would enjoy at all, then it can't be bad. Either that or I've just lost the plot.


You can support Clare by buying Dancing on Ice