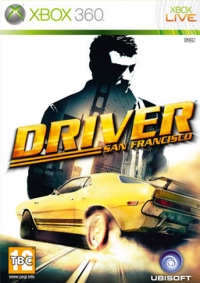 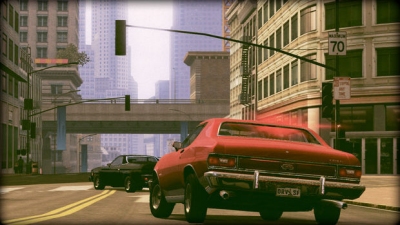 Driver San Francisco 360/PS3 happily returns us to a world where car chases are overblown, lives are intruded upon at will and pedestrians always manage to get out of the way.

I have some fond memories of Driver. On the PC it was a game that re-ignited my interest in open world experiences, and big budget games in general. The first Driver was something of a revelation, as much for its Starsky and Hutch swagger and soundtrack as for its creation of a virtual playground in which to play. The latter soon became bread and butter for Grand Theft Auto and the like, but no-one quite managed to recreate the sheer joy and exuberance of that fun-loving original -- not even its follow-ups.

Like is often the case with trend setters, Driver as a franchise has struggled to find its stride after its initial success. It has seemed unsure whether to (or how to) separate itself from the ever increasing pack. Thankfully Driver San Francisco is the antedate the series needed.

Gone is the ability to walk around the world, gone is the ever expand mission types and gone is the overly long list of characters. In their place is the razzmatazz and TV drama showmanship that made the first game such fun. We are back in the tongue in cheek bravado of TV cop shows with squealing wheels and drifting rear ends.

But more than a simple return to what Driver has been in the past, this liberation from serious world (re)creation has freed the developer's imagination. Unshackled by realism we find ourselves embroiled in a strangely supernatural scenario that (as you will read) sounds bizarre but actually fits together very well with its own careful logic.

I don't think its giving too much away to say that early on in the game you are introduced to the idea of switching vehicles at will. In fact you don't just switch into control of other cars but are actually switching bodies with other drivers.

You listen into the mundane, peculiar and insane lives of San Francisco's citizens.

This is a much more interesting than just switching cars as in the course of each switch you get to listen into the mundane, peculiar and insane lives of San Francisco's automotive citizens. For those who remember early 90's American TV it's a setup that is only a whisker away from Sam Becket's do-gooding travels -- a theme that is quickly picked up on as with your new power comes new responsibilities.

This all sounds a little clunky I know. But the execution is easily solid enough to support what is asked of it. In fact the dialogue, both incidental and plot-centric, was one of the high points of the game for me. But more than a gimmick, this device is used to propel you into new gameplay possibilities and this, more than any clever narrative, is what makes Driver San Francisco a success and an interesting one at that..

This simple change in gameplay open up a whole new set of tactics I'd not experienced in a driving game previously. For instance, when being chased by the oh so familiar (and oh so over zealous) Driver police force you now have the option of jumping into an on coming car and swerving into their path. Not quite the intervention that Ziggy or Al would approve of I know, but in this video game version of Quantum Leap it is gameplay rather than ethics that win the day.

This plays out through a story that is advanced by completing particular missions in the city, and can be taken (along with numerous special ability granting side quests) at its own pace. Much like Burnout Paradise you trigger these and other missions by finding them on the map and simply tapping a button. Unlike Burnout though, because of the free roaming nature of the car shifting mechanic you can quickly navigate to any mission start point at ease -- and without the need to drive there, or drive back there if you fail.

Another thing that Driver has over Burnout Paradise is a split screen multiplayer mode.

Although I'm a big fan of Burnout, I found myself preferring Driver San Francisco's more story driven momentum. Not being all that into collecting cars or points I always struggled to find enough incentive to play Burnout Paradise as much as I thought I would. Here, there is a combination of character and plot development to keep me going.

Another thing that Driver has over Burnout Paradise is a split screen multiplayer mode. Although this is limited to non-story elements of the game, shying away from a full co-op, it is good to see local competitive and cooperative play being supported in addition to the more in vogue Xbox Live multiplayer features.

Running through the middle of all this is a clear desire to mirror the outlandish driving style of 80's hillbilly petrol head show Dukes of Hazard -- both in terms of handling and car selection. It may sound like a small thing, but in an instant it was clear what Driver had been missing in the intervening years: its swagger.

If the success of the big console version could have been foreseen perhaps the 3DS and Wii games could have been more ambitious as well. As it stands though, the Wii game is touted as a prequel to the original and sidesteps both the car shifting mechanic and on-foot escapades. Like the first Driver game on the Wii you can shoot with the Wii-mote while driving with the Nun-chuck. It's a safe approach to a game that may not have as much of a following among the more casual Wii crowd, but also an opportunity missed to win new converts to the Driver ecosystem..

Driver San Francisco is billed as a reboot, and I roundly welcome it as a success.

The 3DS version - Driver Renegade is a little more surprising. Again this follows a different format to the big console version, and a different story that is told through Hotel Dusk aping hand drawn cells. Driver Renegade, as it is called on the 3DS, turns out to be a more "mature" version and by that I mean that it swears much more. This means that it is rated PEGI 16 as opposed to the 360/PS3 version's PEGI 12 rating.

On the big consoles, and on PC/Mac is where you find the real heart of the experience though. Driver San Francisco made me smile many more times in the first few hours than both Parallel Lines (3) and Back on the Streets (2). Thank goodness for games that remember they are primarily about having fun. Driver San Francisco is billed as a reboot, and on that basis I roundly welcome it as a success. "Oh Boy", as one time travelling superstar would say.

You can support Andy by buying Driver San Francisco