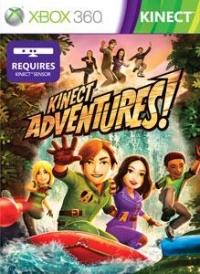 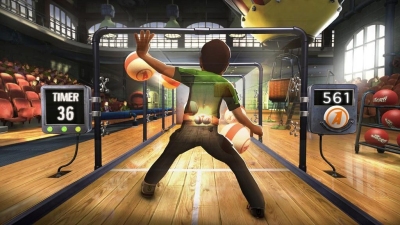 Kinect Adventures proves its point satisfactorily, but it's not the celebration of great hands free gaming I was expected from a packed in game. That honour still rests with Kinect Sports.

Kinect Adventures offers five different activities themed together around a team of extreme sports enthusiasts who travel the world collecting animated trophies. But although it's couched in exciting rhetoric, the actual experience felt a little muted to my family.

Kinect Adventures is the game packed in with the Kinect controller. It holds the same introductory ground as Wii-Sports did for the Wii, and is certainly a strong proof on concept.

Rallyball is the game I'd seen most often before trying Kinect myself. It's a version of Arkanoid where your body is the bat. It's really good fun and well executed. You really have to move around if you are to hit balls heading for the corners.

The kids loved this one and it works because it's simple. By putting your avatar on screen you can see exactly how the Kinect controller is picking up your movements - it's so accurate it's a little uncanny. Combine this with the amount of movement and energy expelled and it's a great showcase for the technology.

River Rush has you stood in a raft steering by leaning and jumping to gain height. It's another impressive looking experience as you float down the bubbling jungle rapids. But unlike the exuberance of Rallyball, here Kinect is a little less convincing. It's totally playable and we enjoyed it a lot, but you have to put up with more of a disconnection between your movements and the game's response.

Reflex Ridge is a similar type of game to River Rush, although you don't have to worry about steering. Instead you are tasked with ducking, jumping and moving left or right. This works much better with Kinect quickly picking up your moves. Because you only have to indicate one action at a time there is much more connection between your movement and the on-screen action.

It's a version of Arkanoid where your body is the bat.

Space Pop and 20,000 leaks make use of Kinect's spatial awareness. And here we step into vaguer territory. In each game you are placed in a room and tasked to move your body to interact with a particular location - to either pop a bubble or stop a leak. Although, The Twister-like body contortions that 20,000 Leaks gets you to attempt work well, and are fun to watch, Kinect seemed to struggle here with its depth perception.

Kinect Adventures more than proves that Kinect as a concept works and is a fun way to control a variety of experiences. It looks great and the kids happily jumped around in front of it for hours.

But the experience as a whole felt uninspiring. Rather than a celebration of all that makes Kinect so compelling - limb detection and exuberant movement - things were a little too familiar. The minigames that worked best were those that really couldn't be done on another system - like Rallyball's body blocking mechanic.

Rather than a celebration of all that makes Kinect so compelling - limb detection and exuberant movement - things were a little too familiar.

Other minigames though felt like they would work better on the existing motion technology. 20,000 Leaks in particular would benefit from the accurate depth perception Move brings to the table, and River Rush from the Wii's more direct controls.

It seems odd that it is Kinect Adventures, rather than Kinect Sports, that is packed in with the controller. But maybe this is done in the knowledge that you will buy Kinect Sports anyway. Either way it is the latter title you should look to for the definitive introductory Kinect experience.

You can support Andy by buying Kinect Adventures