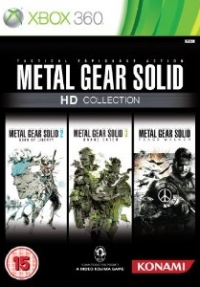 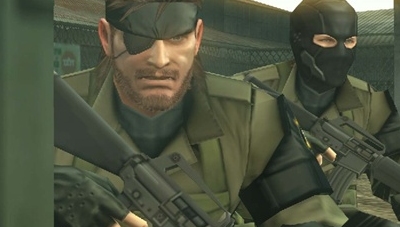 Metal Gear Solid HD gets a UK release on PS3 and more interestingly on 360. But more than this novelty it's the quality of the original games that really excited me here.

Being at the thin end of the console cycle is a double edged sword. Things are maxed out in terms of visuals and surprises, but it's the perfect time to re-release classic games with upscaled and reworked visuals. After the excellent Ico and Shadow of the Colossus HD and God of War HD collections we now have Metal Gear Solid HD Collection.

Don't let the fact that there are older PlayStation titles put you off though. Choppy visuals and limited storage are just the outer skin of some of the most perfectly judged stealth action videogame thrillers.

Metal Gear Solid 3 Snake Eater stands out as the real star and is arguably Hideo Kojima's finest work. There is the real touch of an auteur director here as imaginative storytelling and dramatic set-pieces combine to create some heart stopping moments.

Metal Gear games work on a simple survival premise, but unlike the recently popular horror genre survival here is about strategy, tactics and stealth. Rather than the ever expanding arsenal of weapons found in Dead Island or Resident Evil 5 Metal Gear expects you to survive with only limited tools.

There's a surprising thrill to sneaking across enemy lines, using field craft and the refuse of war to survive. Magical moments abound in Metal Gear Solid 3 where you find yourself harvesting not only fruit and animals but fungus and other less edible elements to simply stay alive.

In HD every last piece of geometry contributes to the sense of fighting the elements out at sea.

In high definition this all looks fresh and modern. Because the original designs were themselves stylised and angular they seem to make the transition to higher definition without too much of a jar. Things are locked down to 60 frames per second as well so the games have an added smoothness not possible with the straining original hardware. Metal Gear Solid 3 also benefits from the third-person camera that was previously the reserve of the limited Subsistence release of the game.

Alongside Snake Eater the other titles pale a little, but still have their moments. Metal Gear Solid 2 Sons of Liberty has some stand out sections, the storm battered ship really makes the most of the improved visuals. Whereas much of the detail was lost in the original, in HD every last piece of geometry contributes to the sense of fighting the elements out at sea.

Then there is Peace Walker, which brings the top-tier PSP game to the home consoles. Leading on from Snake Eater we are in classic Metal Gear mode, but with added strategy as you get to co-ordinate the disparate elements of your forces. There's also the great feature where you can save enemy units and employ them on your side after a quick visit back to base. Playing this reminded me how obsessive you can get over collecting all these different elements -- obviously very different, but not a million miles from Pokemon. And all this with the added benefit of co-operative play via PSN or XBox Live.

While these games are not part of my usual gaming habit, the high definition makeover has made them my go to games of late.

The collection is rounded off by the old MSX games. While it is nice to have the complete set there is slightly less fun to be had with these. That said, I really enjoyed seeing how the story of Metal Gear Solid took shaped before the games came to be what they are today.

The only negative in what is a comprehensive package is that this is basically an up-scaled version of the game, rather than a retextured and tweaked remake like Zelda Ocarina of Time (3DS).

While these sorts of games are not part of my usual gaming habit, having the complete set made accessible like this, not to mention the high definition makeover has made them my go to games of late. Now that they are getting a UK release it really would be a shame to miss out.

You can support Andy by buying Metal Gear Solid HD