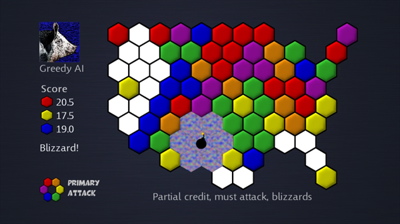 The Indie Game marketplace on Xbox Live is largely overlooked, yet sometimes the odd gem will turn up that is definitely worth checking out. Primary Attack on XBLA 360 is one of these.

Primary Attack smacks of 70's board game classic Othello. Place your coloured tile on the game map and, if it's next to an opponents, you'll change that player's tile colour. However, instead of changing tiles to your own colour, they change to whatever colour the two tiles would make if mixed like paint. Also, the play area isn't merely a square board; in Primary Attack 360 there's a selection of maps that resemble honeycomb due to the use of hexagons as tile slots.

As an educational tool, Primary Attack isn't much if my own kids are anything to go by. When I sat down to play this very simple game, I was expecting the eldest to take some interest, maybe even pick up the second controller and have a go. Nothing's more satisfying than beating your dad at a game, right? Five minutes later, they'd all left. Seems the sight of a clump of hexagonal tiles changing colour doesn't elicit excitement in small children.

I can't blame them, it took two games to get to grips with the rules and after that I won very single encounter. There are a number of opponents to choose from, but the hardest to play against were Greedy and Vengeful. Greedy loves to gobble up every tile it can and Vengeful just tries to ruin anyone foolish enough to mess with it. But no matter what combination of opponents I selected to play against, I still won every time. And that's not because I am a genius at board games - half the time I didn't really know what I was doing, I was just doing it better than the AI.

Even my youngest, who can normally be relied upon to bash the buttons whatever the game, gave it half a glance and carried on playing with his cars.

My wife had absolutely no interest in XBLA's Primary Attack on the 360, preferring to surf the net until I'd relinquished control of the telly, and after half an hour of repeated victories my own interest dwindled to nothing. That's the trouble with a lot of these Indie games - they're fun for a short while and then, like a stocking filler, they're completely forgotten about until you find them again stuffed down the side of the sofa. Even my youngest, who can normally be relied upon to bash the buttons whatever the game, gave it half a glance and carried on playing with his cars.

It brought back some Christmas memories of being thrashed at Othello by my brain-box uncle.

However, it did encourage us all to play together, just not video games. It brought back some Christmas memories of being thrashed at Othello by my brain-box uncle. Which in turn drove me to dig out the draughts set and thrash my own daughter. And that led to us digging out Connect 4 and having a massive, all evening, family tournament. When a video game drives you off the console and into the old toy cupboard, perhaps that's not what the developers exactly had in mind.

You can support Andy by buying Primary Attack