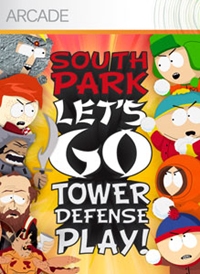 South Park, undoubtedly, is one of the funniest animated series on TV right now, up there with The Simpsons and Family Guy. But in my experience, any game released that is tied in to any film or TV series is usually a disappointing waste of time.

In South Park Tower Defence the whole town is under attack from a variety of South Park stalwarts: hippies, parents, demons, gnomes, if it's in South Park it's in South Park Tower Defence. You play as any one of the four main characters; initially on your own, but as you progress the others become available to help. The basic premise is that each level sees a number of waves of enemies trying to get from one side of the screen to the other while you and your team build armed towers and throw snowballs at them until they've run out of steam and died. Let too many get past and it's game over.

Being a bit of a fan of South Park, I wish I could say that this game was a riot of laughs and lewdness. But the truth is far from that. Initially, I played the game solo, which was okay up to a point - the point where it became absolutely impossible to stem the tide of hippies flooding across the screen. It hadn't really sunk in that I was bored stupid by then. It was only when my wife joined me on the sofa, watched what was going on, and pointed out that it looked very boring that the penny dropped. Yes, it is boring, I agreed. But perhaps I was playing it wrong. Since South Park Tower Defence is an Arcade game, only available to download via Xbox Live, it's probably meant to be played with other people. So the next time I sat down to play, I jumped online and joined a game that was already in progress.

It didn't matter that the game I'd joined was being played on the hardest level, what I was hoping for was some fun, social gaming excitement.

It didn't matter that the game I'd joined was being played on the hardest level, what I was hoping for was some fun, social gaming excitement. Except no one was talking. No one but myself had a headset on. Which seemed a little strange since teamwork would definitely make this game easier to win. Never mind, I thought, we don't really need to talk to each other. All we need to do is work together and we'd beat this game. Five minutes later I realised I didn't care. I didn't care if we got to the next level. I didn't care if I died and no one came to save me (get touched by an enemy and you fall to the floor, stuck there until someone comes and picks you up). I didn't care if all the demons made it to the other side. I didn't care if I never played this game again.

I tried a number of times more, jumping in to online games (and there were very, very few of them). But every time the result was the same - within five minutes of playing I was bored stupid. I tried getting my wife to play since she's also a big South Park fan, but she flat refused. She'd rather go and pull her leg hairs out than waste time with this game. My kids, normally my biggest gaming fans, watched for maybe a minute or so and then slipped away to play with the train set that was sprawled across the living room floor. I found myself not watching the screen at all in favour of watching the two of them, lost in their own world of Fat Controllers, turntables and derailment disasters.

I stopped playing, got down on the floor with the kids, made a huge train track from one end of the room to the other and together we played our own tower defence game.

There are two real problems with this. For starters, I've spent lots of time mucking around with the indie games on Xbox Live and there are tons of tower defence games available there. All of them are at a fraction of the cost of South Park Tower Defence, and many of them a darn sight more enjoyable to play. So when you take away the fact that this is a South Park game, complete with South Park style graphics and South Park style humour, what you've got is a mediocre tower defence game. Tower defence games are one-dimensional things at the best of times. Making them more entertaining by adding South Park to the mix might seem like a good idea, but I was so busy trying to slam snowballs into hippies' faces that I didn't actually notice anything funny. And that's the other problem - it's not very funny. The further you go in the game, the more extras are unlocked, like videos of classic South Park scenes, but you'll have no doubt seen these on TV already and they're hardly a reason to keep playing. In fact, the graphical style of South Park just makes this game more visually incoherent compared to the majority of tower defence games.

In the end, I stopped playing, got down on the floor with the kids, made a huge train track from one end of the room to the other and together we played our own tower defence game. Dad has to try and get all the trains from one end of the room to the other while son and daughter have to smash them off the rails. Finally, I had found a way to make a tower defence game both social and hilarious - the sight of my two-year-old son walloping Thomas The Tank Engine off his wooden track and laughingly shouting smash had me in stitches. The only trouble is that they've been asking to play again every day and the bit of me that hates losing games really doesn't want to.

You can support Andy by buying South Park Tower Defence