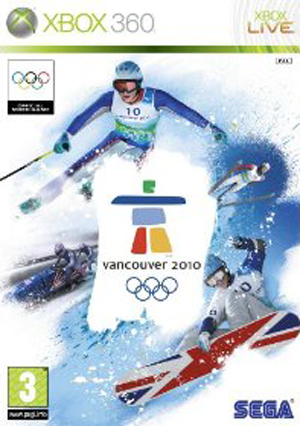 Other GamePeople columnists have reviewed this from their perspective - huh?:
Returning Gamer (360)
Frugal Gamer (360) 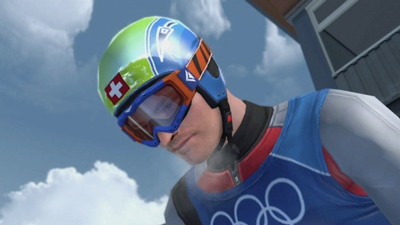 Vancouver 2010 360 is the closest I'll get to the Winter Olympics. While there are plenty of events the increasing difficulty and fiddly controls make this more of a runner up, rather than an Olympian.

My wife and I were very excited about Vancouver 2010, we often spend hours playing Track and Field on the 360 and we enjoyed playing Beijing 2008. As our excitement grows for watching the actual games on TV we thought we could prep by playing Vancouver 2010, unfortunately we were very disappointed.

There are several events missing, notably the figure skating and curling. Also, jumping straight into the events is daunting, despite the fact that tutorials are included and can be tried before you take on the real thing. Oftentimes this confusion simply breaks the connection between the player and game. This leads to fumbling around with the controls, leading to frustration which doesn't allow for that time to relax.

Being so used to the mindless button bashing of Track and Field doesn't help with Vancouver 2010, there are too many buttons to press and the lack of simplicity eventually drove my wife away from the game completely. It seems for a game that is designed with more than one player in mind that it alienates the more casual player by overcomplicating the controls and the events. It's hard to enjoy such a game on your own as it can be a very social experience.

The challenge mode sidesteps the difficulty problems and provides entertainment for players of any ability.

Another issue that began to push me away from Vancouver 2010 was the difficulty level, which can't be changed in the options. Each event is very hard and the computer competitors don't go easy on you. Even after several attempts I kept coming last. There's a feeling of dejection due to the difficulty, leaving me disheartened, I found myself not wanting to play anymore.

Luckily I found the Vancouver 2010 challenge mode - all was well with the world again. Here, you play events while trying to achieve certain goals. This is where the game becomes fun again. Once you're used to the controls, the challenge mode sidesteps the difficulty problems and provides entertainment for players of any ability.

It's frustrating that a game based on competitive sports, delivers its enjoyment without any other competitors on the course or leaderboards, but, enjoyable none the less. Each challenge takes place on a mountain of differing difficulty starting on easy and moving up to hard, unlocking each challenge provides that sense of pride needed from a video game and it helps when securing that elusive gold medal proves so difficult.

Despite the ups and downs of the game, there is still a sense of being transported into the events, particularly due to the sense of speed. Skiing downhill or barreling through a bobsleigh course will see the screen edges blurring and bleeding away as you speed through twists and turns. This helps to solidify the experience of 'being at the games' and is amplified by the sounds of the crowds cheering you on and the sharp rasp of the ice under your skates or skis.

My wife enjoyed watching the game and cheering when the outcome of an event is good.

Although there wasn't an option for her to join in, my wife enjoyed watching the game and cheering when the outcome of an event is good. There is the option of taking the game online and playing with random people but currently the servers are very empty, leaving you to stack up your performance against the worldwide leaderboards, which brings back the competitive edge without the computer players.

While there are elements of Vancouver 2010 I enjoyed, I missed the social interaction of playing with other people. In days gone by when Track and Field was more popular, friends and family would gather around and frantically tap away at the buttons to jostle for position against each other - creating friendly banter. Even with excellent visuals, Vancouver 2010 on both PS3 and 360 misses that mark. It can't replace playing the thrill of playing with other people.


You can support Andy by buying Vancouver 2010