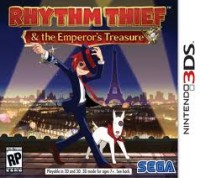 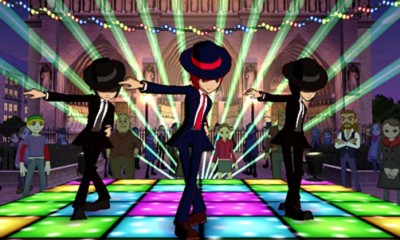 Rhythm Thief and The Emperor's Treasure always sounded interesting, but turns out to be a fantastic rhythm action game on the 3DS with a great story and engaging side-quests. Perfect for families.

Over the past few years I've warmed to story-led adventure games. I've always enjoyed Zelda but never really wanted to commit the time to finish it, or the tens of other similar games.

As the incoming games on the DS have dwindled I've discovered a clutch of adventures that not only created the best visual experience on the diminutive handheld but also told an engaging story. Ghost Trick, Solatorobo and Okamiden were each very different, but hooked me in with their meandering narrative and engaging characters.

Rhythm Thief and The Emperor's Treasure is the first game like this for me on the 3DS. It's simply magical, and a huge surprise that it offers so much quality. It stands on the shoulders of Professor Layton's full cartoon presentation, but brings that experience into full 3D movies on the upper screen. Along with this it injects the swaggering storytelling of Ghost Trick.

It's set in Paris and follows young Raphael, a known thief who steals artifacts and then returns them a few days later. He was abandoned by his father, leaving him only a coin with an odd symbol. Raphael soon discovers this symbol in different works of art and sets about stealing them. The plot thickens when he meets another orphan Maria, who also has the same symbol on her violin.

The same moreish quality I find when playing Professor Layton.

Although this is the best part of the game it is also its Achilles heel. The difficulty of each of these musical and rhythm challenges varies greatly. There are plenty I really enjoyed but found too easy, as well as a handful that I struggled to complete. What compounds this lumpy difficulty is that on the non-timed challenges you can't quit if you get stuck. My kids often had to turn the game off because they couldn't get any further, and couldn't go back.

That said, these musical elements make great use of the 3DS buttons, touch screen and gyroscope to engage you in the various musical challenges. Some are action oriented, like the soccer battle where you have to press buttons at the right time to defend yourself from an aggressive soccer player. Others are melancholy and more musical, like the simply beautiful moment that you help Maria play a classical piece of music on her violin using the touch screen to bow each note.

This would be more than enough for most games, but Rhythm Thief and The Emperor's Treasure adds a variety of musical fetch quests and hidden object puzzles around the city. The upper screen provides a 3D map for you to navigate while the lower screen offers a tap-able view of each location complete with various characters to interact with and find out more of the story.

The combination of the fully animated cartoons and voiced dialogue adds the same moreish quality I find when playing Professor Layton. But while the puzzles in Layton are sometimes a little wearisome the musical challenges in Rhythm Thief are a real treat.

Once you have completed one you are awarded a score and can go back at any point to improve upon this. In our family this has creating a race to get top marks in each challenge, which hasn't happened since the boys got into Elite Beat Agents -- something that let to us importing Osu! Tatakae! Ouendan before their obsession was finally sated.

Rhythm Thief has come out of nowhere and is easily my favourite game on 3DS so far.

Rhythm Thief has come out of nowhere and is easily my favourite game on 3DS so far. It combines the best of Elite Beat Agents and Ghost Trick with some Solatorobo french-ness thrown in for goo measure.

A bit of hunting around uncovered that developer Xeen was created from Video System the team responsible for Mario Kart Arcade. The size of the studio (over 100 strong) and their previous focus on arcade games may be the reason for the level of quality and depth here.

But now the bad news, although it was out in Japan in January and hits Europe early April it won't arrive in the US until July. This is where the 3DS's region lock really hurts us early adopters.

However, if you haven't yet druank deep from Ghost Trick, Elite Beat Agents and Professor Layton already these games are an excellent way to pass the time, and ready yourself for Rhythm Thief.